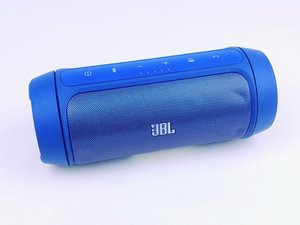 A Bluetooth speaker for mobile devices and tablets that can make phone calls for the paired device . Released in Fall 2014.

How do I disassemble my Jbl Charge 2?

My Jbl Charge 2 sounds distorted, sounds like if the speaker popped, and I only used it for like a month.

I need to know this as well. There is a french guy dismantling it on youtube, but I can't understand what he's saying!

Had this happen to me as well but the retailer had me contact JBL for an exchange. Still waiting to see how that works out. But there is a manufacturers one year warranty if you have the purchase receipt.

I will make a video and post a few pictures tomorrow if you like. It seems that nobody took the time to do so after a year.

I have a charge2+ which I am pretty sure is not counterfeit (sent pictures to JBL service center) but it does not come apart the same way as my other charge2+. The battery compartment is totally different and it looks as though I should pop the end caps off. However, I don’t want to do that without getting confirmation. Has anyone seen a charge2+ with 3 silver screws by the speakers holding two halves together and no screws for removing the end cap cover assembly?