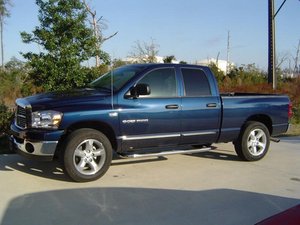 The third-generation Ram was unveiled on February 7, 2001 at the 2001 Chicago Auto Show. This was a major update including an all new frame, suspension, powertrains, interiors, and sheet metal.

04 dodge ram 3.7 it acts like something is holding it back

set your parking brake..SAFETY FIRST.. i put THAT first everyday TO keep emergency hospital bills away!

lay under it..HOT EXHAUST BURNS.. so if you just drove it THINK! use the side of your Fist if she's not been driven and exhaust isn't HOT Bang Bang Bang under the last Catalytic Convertor just after the Y where the right and left exhaust pipes Y together.. what we seek to HEAR is clunkity clunk noise Inside that convertor just after you bang under it with your fist sideways..or a mallet if she's HOT from just being driven.. that CLUNK rattle noise INSIDE the convertor..it means the hard rock with a thousand tiny tiny air passages that lets the exhaust pass thru has broke LOOSE and cracked in 2 or 3 or more pieces inside that convertor.. bang under it..you'll hear that broken crap rattle inside of it as you bang against it.. and THAT causes the feeling that its tied up to something heavy as you XLR8.. and it only does it Sometimes because the broken pieces inside wiggled and all the tiny tiny passages in that big rock brick in there aint lining up..so all the air gets like there is a potato in the tailpipe choking down power to !&&* and back ..& that's what HAPPENS when the Brick full of 1000 air passages inside has only broke in half.. it causes the two pieces to slightly MOVE until they don't line up to where all the 1000 tiny tiny long drilled holes from end to end through that brick NOT TO line up in between the two pieces that are supposed to be ONE PIECE.. and Voila!.. IMPORTANT NOTE!! sometimes that brick can bust into a bunch of pieces..then all the golf ball sized broken clumps of that brick pass out the back of the convertor and THIS SORT OF Common Issue with hi miler vehicles is a nasty lesson that most don't even think about..BUT it IS WHAT Plugs up the inside of that Muffler just behind it too.. so that's why a do it yourselves pretty good fixit fella's who didn't REALIZE this IS STILL WONDERING WHY it didn't fix their power loss issue after they replaced the bad convertor themselves too!

Now to answer your new question you have now.. after you heard that rattle rattleSMILE Giving noise of TahhDAHH you just got after you went bang under that MOPAR= Jeep,Dodge,Chrysler catalytic convertor and realized Holy Crap This Fella Knows Dodge's oddest issues that most certiied tech's overlook..

They Break when raw fuel puddles up inside them..Thats why OK!

and lack of maintenance like spark plug changing or lack of dielectric grease on those coil boots that slip over the top of spark plugs wasnt used..and the sparks ARK is slinging off to the closest path which would be the ID diameter of the tube the plug snuggly fits inside of too.. either of the above (or when its an Older year model the Injectors SEALING O RINGS don't seal and to much fuel enters the cylinders) either of these 3 issues allow some fuel to NOT FULLY burn.. so it exits down the exhaust and it puddles up..and that convertors job is to just be very hot hot so it burns unburned FUMES -Not puddles of GAS! so it gets hotter than that brick can handle= snap crackle POP it cracked and broke!

the reason I Know is i am a good visual image type of understanding mechanic..+ it is mainly Because my dearest friend Ding Naquin is actually the best Custom Exhaust Guy anyone has ever seen.. and He taught ME about and blessed me with the WISDOM on Convertors.. when My '04 Dodge convertor caused the same %#*@ issue at random..not all the time..just every now and then.. and because he Tipped me off about all that crap also passes through and exits out the back of my broken convertor and Plugs shut at random inside that darn muffler up that is right behind it..

so he schooled me as he explained how wise it is to just angle the cut pipe down ..just tugg the pipe down after i chop the exit pipe OFF just behind that bad convertor with my saws all ..and then use a rubber mallet to bang bang all the chunks out the muffler..because tugging the pipe downward lets gravity do the rest for you..once thy good ole mallet gets em rolling downhill out that plugged muffler you so glad you knew about from DING schooling us both on how to handle that trick with ease.. OH 1 more tip.. look up what a Non Fouler is ..those little screw on collars that you put onto the ends of Spark plugs to help a oil devouring old hi mile engine NOT FOUL SPARK PLUGS by the boxful per month.. fact is..THOSE non fouler's also come in a few sizes to fit different diameter spark plug threaded shanks.. well put just 1 of these in the threaded hole behind the convertor.. and the reason you do this.. is because just that much longer out away from the inside of your exhaust pipe just behind the convertor Happens to BE the Perfect amount to balance the difference between the readings of the 02 sensor before the GUTTED OUT and EMPTY Convertor that you beat the remainder of the broken brick inside of it OUT with a crowbar and hammer & the last 02 sensor behind it.. so YES SIR!! the non fouler that you got for $5 and then screwed the rear 02 sensor into so it extended the REAR 02 sensor outward further than the 02 sensor in front of it.. that is the only way the slight difference in readings that are sent back to the computer will be the perfect amount in different readings ..now you can grin and KNOW you are SMARTER because You just FOOLED the engine managing COMPUTER!.. so you don't have to buy a several hundred dollar new convertor to prevent that Check Engine trouble code light from lighting up..

Now ..here is My last piece of my Free Wisdom for all my Broke wallet Brothers!

whenever THAT light is On..it triggers a command.. to make the engines fuel system send way more gas= RUN RICH as a protective measure.. and that's gonna ether crack up or plug up the brick inside any convertor eventually on ANY gas engine too..