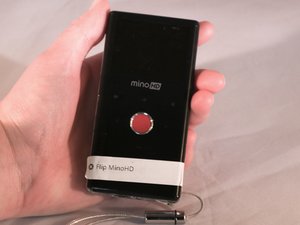 Released in 2010, the Flip Mino HD is a pocket-sized camcorder with 4 GB and one hour of shooting capacity.

My Flip Mino Doesnt power on

I would like to know if any one knows of a flip repair facility? I contact flip and I also followed the same instructions in youtube it worked for about 5 min and after i powered it off I was not able to turn it on again.

I had them same problem. I would add that when I attached the FLIP MinoHD to my computer via its USB jack, the led on the jack blinked continuously, yet the device was not even acknowledged by windows, nor would it power on after sufficient time for a complete charge.

Also, I tried the reset button hidden in the tripod socket, and called tech. serv. only to discover that repair would cost as much as a new unit!! Only worthwhile, perhaps, if you have very valuable video trapped in the device's memory. I didn't.

I looked at the disassembly instructions here at ifixit.com and determined that the first chip near the usb jack (TPD12S521DBTR) was a likely bad component and ordered a couple from digikey.com for $1.79 each. When the chips arrived, I opened my MinoHD only to discover it had a substantially different design from the ifixit.com version, and the chip I ordered was not in my design!!

I reassembled the dang thing, and it works fine. I can only conclude it was probably a bad connection or a bad logic state which was corrected by disconnection and reconnection of the internal components. At any rate, the video from 13 months ago was intact, and 18% battery charge remained. There was a frightening moment when first powered on where factory specs were displayed for minute or so, and an option to reset by holding the red button was offered. I tried that, but am unsure whether it actually reset. At any rate, videos from 13 months ago remained in memory and have now been safely off-loaded.

I have a few iphone pics of my unit's innards.

How do you dismantle it? My MinoHD doesnt have any little screws or any obvious way I can access the battery or internals.

live tech support didnt help as Im in Australia and they 'have no repair centres in Australia' or contact number. Help?

It's not recognised on any computer, doesnt turn on, even after the restarting process.

There is a Sticker on the bottom all around the Mounting Port... Peel the sticker off and the screws are right there.

I just managed to fix my Flip Mino (not HD), following the MinoHD manual and Scott's tip above. I had the same symptoms; didn't turn on, flashing white light forever and the drive wouldn't mount. Tech support is useless.

The Mino is close enough to the HD that it wasn't hard to get it apart. The only thing that was necessary to do is to unplug the logic board (underneath the board at roughly left center) and then plug it in again. Booted up right away to what looked like a firmware screen, and after rebooting, everything was normal. Battery had a full charge.

This was after a long and fruitless round of email with tech support. Despite numerous resets following their somewhat bizarre instructions, absolutely nothing worked. The process could have gone a lot faster if they'd actually read my questions. The first reply to my email asked my to provide several pieces of information, including my email address. Which is sort of a funny thing to ask for, since they asked it in an email sent to my email address. Aack.

I was also able to fix my MinoHD with the instructions above! I dismantled it to the point where I unplugged the battery and then put it all back together.

Make sure the LCD cable is all the way in the ZIF socket. The first time I re-assembled it, the screen did not work. On the second try it was good to go!

All you have to do is stick a paper clip in to the hole in the tripod screw .

Hold it in for 7 seconds do this 3 or 4 times and that should reboot it.

The reset button didn't work for me. I had to dissemble it enough so that I could detach the battery clip on the underside of the board and then plug it back in. I didn't have tot desolder the wires or anything - just unscrew the four screws around the edges of the boar. This was enough to reset the device, however, I found it didn't work right away as it would only power on the next day.

When dissasembling make sure you DON'T unscrew the two screws in the centre of the board underneath the screen! These hold attach the camera to the board. Although you can take the camera off, it's a bit of a pain to get it to reseat into the board. It has four little feet, one on each corner, that have to fit into holes in the board. If it's not reseated it may still work but the video will be out of focus ... Trust me! After three tries I got it reseated and back together and it now works fine and is on focus.