Second generation of iPhone. Model A1241 / 8 or 16 GB capacity / black or white plastic back. Repair is more straightforward than the first iPhone. requires screwdrivers, prying, and suction tools.

I opened my iPhone yesterday to try to fix a broken vibrating module. This was not working due to a previous (successful) operation fixing a constantly switching in & out of silent mode problem rendering the phone un-usable.

I was following the guides on here but was still way more rough that I had liked (I was trying to lift up underneath the silver bevel). I also noticed a spark created from my metallic screwdriver (bad idea! I know!) at the spot shown in the attached photo.

- it's hard to imagine the spark (probably from shorting a capacitor used to apply the high burst current needed for the vibration) is the cause since it is on a different board than the microphone module and everything else on the phone seems to work fine.

- Broken micro-connector no. 4? But charging the phone and sync'ing it to my computer works fine. All of these connections are made from the docking module to the main board via this connector. It would be very unlucky for just the 2 connections for the microphone to break here.

- the microphone itself? It's hard to see the transducer breaking. And the connections and soldering appear to be fine (they seem quite robust).

So I am completely lost as to what to look for and what to test for! Maybe my logic is wrong somewhere, I don't claim to be an electronics expert at all. Can anyone offer suggestions as to what could be broken and what tests I can do? I have access to most electronic equipment available at my lab (scope, multimeters, power-supplies, etc...). 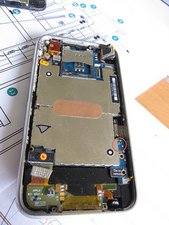 Try to clean the contacts.

Sounds like it might be a mechanical problem as you mentioned from the "bzzzt". Just in case, try this -- it worked for me: