Learn about the different types of PC processors.

Author: Sam Goldheart (and 5 other contributors)

A few years ago, choosing a processor was pretty straightforward. AMD and Intel each produced two series of processors, a mainstream line and a budget line. Each company used only one processor socket, and there was a limited range of processor speeds available. If you wanted an Intel processor, you might have a dozen mainstream models and a half-dozen budget models to choose among. The same was true of AMD.

To further confuse matters, most AMD and Intel processors are available in two types of packaging, called OEM and retail-boxed. OEM processor packages include only the bare processor and usually provide only a 90-day warranty. Retail-boxed processors include the processor, a compatible CPU cooler, and a longer warranty, typically three years.

A retail-boxed processor is usually the better deal. It typically costs only a few dollars more than the OEM version of the same processor, and the bundled CPU cooler is usually worth more than the price difference. But if you plan to install an after-market CPU cooler for example, because you are upgrading your system to be as quiet as possible it may make sense to buy the OEM processor.

Nowadays, choosing a processor isn't as simple. AMD and Intel now make literally scores of different processor models. Each company now offers several lines of processors, which differ in clock speed, L2 cache, socket type, host-bus speed, special features supported, and other characteristics. Even the model names are confusing. AMD, for example, has offered at least five different processor models under the same name Athlon 64 3200+. An Intel Celeron model number that ends in J fits Socket 775, and the same model number without the J designates the same processor for Socket 478. A Pentium 4 processor model number that ends in J says nothing about the socket type it is designed for, but indicates that the processor supports the execute-disable bit feature. And so on.

AMD and Intel each offer the three categories of processors described in the following sections.

AMD actually packages two different processors under the Sempron name. A Socket A Sempron, also called a K7 Sempron, is in fact a re-badged Athlon XP processor. A Socket 754 Sempron, shown in Figure 5-1 is also called a K8 Sempron, and is really a cut-down Athlon 64 model running at a lower clock speed with a smaller L2 cache and a single-channel memory controller rather than the dual-channel memory controller of the Athlon 64. Early Sempron models had no support for 64-bit processing. Recent Sempron models include 64-bit support, although the practicality of running 64bit software on a Sempron is questionable. Still, like the Athlon 64, the Sempron also runs 32-bit software very efficiently, so you can think of the 64-bit support as future-proofing. 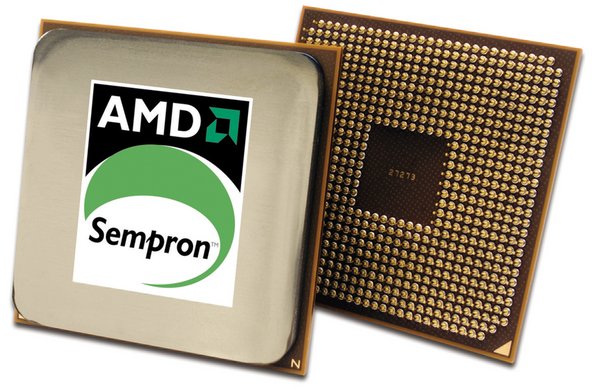 If you have a Socket 462 (A) or Socket 754 motherboard in your system, the Sempron offers an excellent upgrade path. You'll need to verify compatibility of your motherboard with the specific Sempron you intend to install, and you may need to upgrade the BIOS to recognize the Sempron.

For many years, the Intel Celeron processor was the poor stepsister, offering too little performance at too high a price. Cynical observers believed that the only reason Intel sold any Celeron processors at all was that system makers wanted the Intel name on their boxes without having to pay the higher price for an Intel mainstream processor.

That all changed when Intel introduced their Celeron D models, which are now available for Socket 478 and Socket 775 motherboards. While Celeron D models are still slower than Semprons dollar-for-dollar, the disparity is nowhere near as large as in years past. Celeron D processors, which sell in the $60 to $125 range, are very credible upgrade processors for anyone who owns a Socket 478 or Socket 775 motherboard. Like the Sempron, Celeron models are available with 64-bit support, although again the practicality of running 64-bit software on an entry-level processor is questionable. Once again, it's important to verify the compatibility of your motherboard with the specific Celeron you intend to install, and you may need to upgrade the BIOS to recognize the Celeron.

The AMD Athlon 64 processor, shown in Figure 5-2, is available in Socket 754 and Socket 939 variants. As its name indicates, the Athlon 64 supports 64-bit software, although only a tiny percentage of Athlon 64 owners run 64-bit software. Fortunately, the Athlon 64 is equally at home running the 32-bit operating systems and applications software that most of us use. 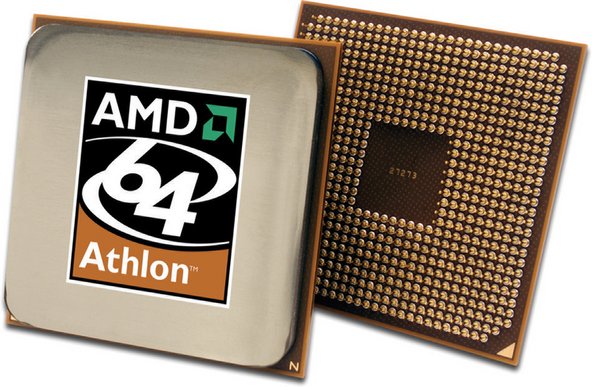 Like the Sempron, the Athlon 64 has a memory controller built onto the processor die, rather than depending on a memory controller that's part of the chipset. The upside of this design decision is that Athlon 64 memory performance is excellent. The downside is that supporting a new type of memory, such as DDR2, requires a processor redesign. Socket 754 models have a single-channel PC3200 DDR-SDRAM memory controller versus the dual-channel controller in Socket 939 models, so Socket 939 models running at the same clock speed and with the same size L2 cache offer somewhat higher performance. For example, AMD designates a Socket 754 Newcastle-core Athlon 64 with 512 KB of L2 cache running at 2.2 GHz a 3200+ model, while the same processor in Socket 939 is designated an Athlon 64 3400+.

The Pentium 4, shown in Figure 5-3, is Intel's flagship processor, and is available in Socket 478 and Socket 775. Unlike AMD which sometimes uses the same Athlon 64 model number to designate four or more different processors with different clock speeds, L2 cache sizes, and sockets Intel uses a numbering scheme that identifies each model unambiguously. 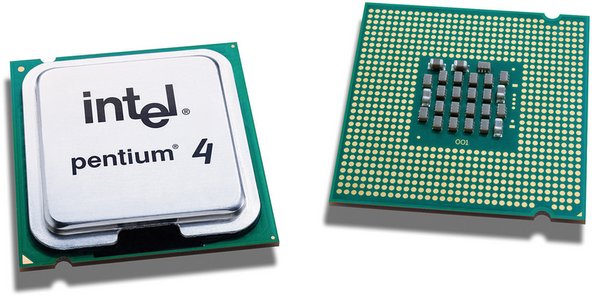 We classify the fastest, most expensive mainstream processors those that sell in the $400 to $500 range as performance processors, but AMD and Intel reserve that category for their top-of-the-line models, which sell for $800 to $1,200. These processors the AMD Athlon 64 FX, the Intel Pentium 4 Extreme Edition, and the Intel Pentium Extreme Edition are targeted at the gaming and enthusiast market, and offer at best marginally faster performance than the fastest mainstream models.

In fact, the performance bump is generally so small that we think anyone who buys one of these processors has more dollars than sense. If you're considering buying one of these outrageously expensive processors, do yourself a favor. Buy a $400 or $500 high-end mainstream processor instead, and use part of the extra money for more memory, a better video card, a better display, better speakers, or some other component that will actually provide a noticeable benefit. Either that, or keep the extra money in the bank.

By early 2005, AMD and Intel had both pushed their processor cores to about the fastest possible speeds, and it had become clear that the only practical way to increase processor performance significantly was to use two processors. Although it's possible to build systems with two physical processors, doing that introduces many complexities, not least a doubling of the already-high power consumption and heat production. AMD, later followed by Intel, chose to go dual-core.

Combining two cores in one processor isn't exactly the same thing as doubling the speed of one processor. For one thing, there is overhead involved in managing the two cores that doesn't exist for a single processor. Also, in a single-tasking environment, a program thread runs no faster on a dual-core processor than it would on a single-core processor, so doubling the number of cores by no means doubles application performance. But in a multitasking environment, where many programs and their threads are competing for processor time, the availability of a second processor core means that one thread can run on one core while a second thread runs on the second core.

The AMD Athlon 64 X2, shown in Figure 5-4, has several things going for it, including high performance, relatively low power requirements and heat production, and compatibility with most existing Socket 939 motherboards. Alas, while Intel has priced its least expensive dual-core processors in the sub-$250 range, the least expensive AMD dual-core models initially sold in the $800 range, which is out of the question for most upgraders. Fortunately, by late 2005 AMD had begun to ship more reasonably priced dual-core models, although availability is limited. 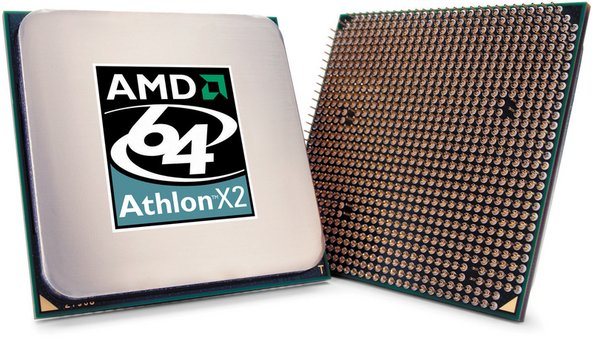 The 800-series 90 nm Smithfield-core Pentium D, shown in Figure 5-5, is a stop-gap kludge for Intel, designed to counter the AMD Athlon 64 X2 until Intel can bring to market its real answer, the dual-core 65 nm Presler-core processor, which is likely to be designated the 900-series Pentium D. The Presler-based dual-core processors will be fully integrated, compatible with existing dual-core Intel-compatible motherboards, and feature reduced power consumption, lower heat output, twice as much L2 cache, and considerably higher performance. 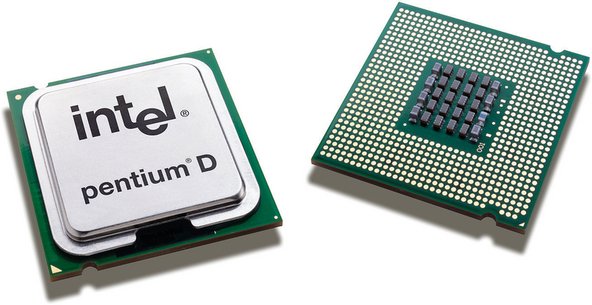 Reading the foregoing, you might think we had only contempt for the 800-series Pentium D processors. In fact, nothing could be further from the truth. They're a kludge, yes, but they're a reasonably cheap, very effective kludge, assuming that you have a motherboard that supports them. We extensively tested an early sample of the least expensive 800-series Pentium D, the 820. The 820 runs at 2.8 GHz, and under light, mostly single-tasking use, the 820 "feels" pretty much like a 2.8 GHz Prescott-core Pentium 4. As we added more and more processes, the difference became clear. Instead of bogging down, as the single-core Prescott would have done, the Pentium D provided snappy response to the foreground process.

Table 5-2 lists the important characteristics of current AMD processors, including the special features they support. 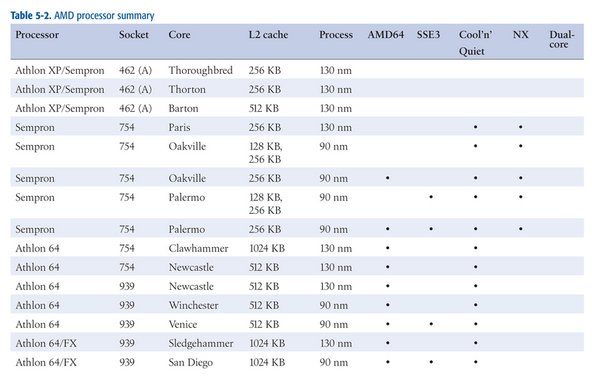 Table 5-3 lists the important characteristics of current Intel processors, including the special features they support.

Special features are not always implemented across an entire line of processors. For example, we list the Pentium D 8XX-series processors as supporting EM64T, SSE3, EIST, and dual core. At the time we wrote this, three Pentium D 8XX models were available: the 2.8 GHz 820, the 3.0 GHz 830, and the 3.2 GHz 840. The 830 and 840 models support all of the special features listed. The 820 model supports EM64T, SSE3, and dual-core operation, but not EIST. If a special feature listed as being supported by a particular line of processors is important to you, verify that it is supported in the exact processor model you intend to buy.

Did not give me what I wanted

Didn't Tell all the processors

Thanks but give us more

Thanks but i want to know more

I want features of all the processor