Learn about the characteristics of PC cases.

Here are the important characteristics of cases.

What the Heck Is BTX?

In mid-2004, Intel began shipping products based on their new Balanced Technology Extended (BTX) form factor, which will eventually replace ATX and its variants. BTX and its smaller variants, microBTX and picoBTX, are primarily a response to cooling problems and other inadequacies in the ATX specification that became evident as the power consumption and heat production of modern processors has continued to increase.

Although BTX motherboard sizes differ little from ATX and its variants, BTX specifies many changes in component layout and orientation, cooling, physical mounting, and so on. BTX motherboards and cases are of similar size and appearance to their ATX analogs, but are physically incompatible with ATX components.

In practical terms, the arrival of BTX is likely to have little short-term effect. Migration to BTX will not occur overnight although Intel would like it to but will take place gradually. ATX motherboards, cases, power supplies, and other components will remain available for years to come. For now, BTX components are scarce and sell at a premium. As we move into 2007 and 2008, BTX components will become mainstream, with ATX gradually relegated to upgrade-only status.

In short, you needn't be concerned about upgrading or repairing an ATX-based system now, because upgrade components are likely to remain available for the usable life of the system. In fact, we are likely to continue recommending ATX in preference to BTX for new systems into 2007, based on the lower cost and wider component availability of ATX components. For more information about BTX, see the Balanced Technology Extended (BTX) Interface Specification Version 1.0 at http://www.formfactors.org.

Cases are available in many styles, including low-profile desktop, standard desktop, micro-tower (for microATX boards), mini-tower, mid-tower, and full-tower. Low-profile cases are popular for mass-market and business-oriented PCs, but we see little purpose for them. They take up more desk space than towers, provide poor expandability, and are difficult to work on. Micro-tower cases take up very little desk space, but otherwise share the drawbacks of low-profile cases. Mini/ mid-tower styles the dividing line between them is nebulous are the most popular, because they consume little desktop space while providing good expandability. Full-tower cases take up no desk space at all, and are tall enough that optical drives are readily accessible. Their cavernous interiors make it very easy to work inside them, and they often provide better cooling than smaller cases. The drawbacks of full-tower cases are that they are more expensive (and heavier!) than other cases, sometimes significantly so, and that they may require using extension cables for keyboard, video, and/or mouse. 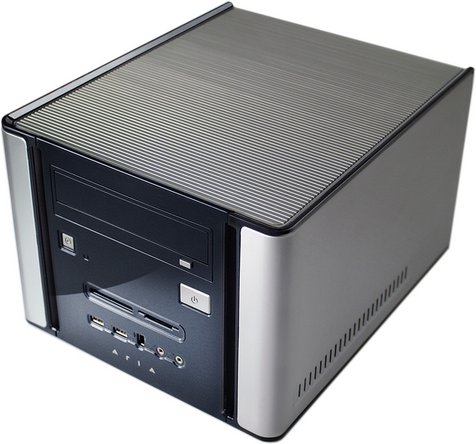 A proprietary case style called Small Form Factor (SFF) is fast gaining popularity, primarily due to the efforts of Shuttle. Such systems are generally called "cubes," although they're really about the shape and size of a shoebox. SFF systems use standard Pentium 4 or Athlon 64 processors, and are designed to cram the power of a full-size PC into the smallest possible box.

SFF PCs have two important drawbacks. First, the form factor is non-standard, which means you can use only motherboards that are designed to fit the specific case. Leading motherboard makers do not make SFF motherboards, so you are limited to motherboards from second- and third-tier makers. Second, cooling is critical when a high-performance processor, a fast hard drive, and a power supply of sufficient wattage are crammed into a shoebox-size enclosure. Although we do not have sufficient data to make an absolute prediction, we expect that the higher operating temperature of SFF PCs will lead to increased instability and a shorter life relative to similar components enclosed in a standard case. We recommend avoiding SFF PCs unless system size is your absolute highest priority.

One exception to the proprietary nature of SFF cases is the Antec Aria, shown in Figure 15-1. The Aria is slightly larger than proprietary SFF cases, which allows it to accept standard microATX motherboards.

TAC (Thermally-Advantaged Chassis) cases cope with the high temperatures of modern processors by exhausting CPU heat directly to the exterior rather than inside the case. To accomplish this, TAC cases use a shroud that covers the processor and CPU cooler and a duct that connects the shroud to the side panel of the case. Because the location of the processor is standardized on ATX-family motherboards and the TAC shroud and duct are adjustable, a TAC-compliant case can be used with nearly any motherboard, processor, and CPU cooler. Figure 15-2 shows the TAC-compliant Antec SLK2650BQE case, a popular mini-tower model, with the TAC vent visible on the left-side panel. 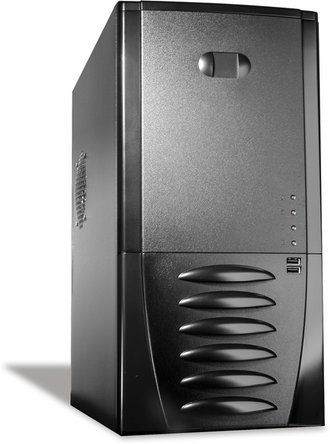 Readers sometimes ask us why we endorse Antec products so strongly. The answer is simple: Antec products are high-quality, rock-solid reliable, competitively priced, and very widely distributed both online and in local stores. Local availability is an important consideration, because it can cost $25 or more to ship a case. Local big-box stores get deliveries in pallet loads, so the shipping cost for an individual case is small. That often means the total cost of a case is less at a local store than from online vendors with nominally lower prices. 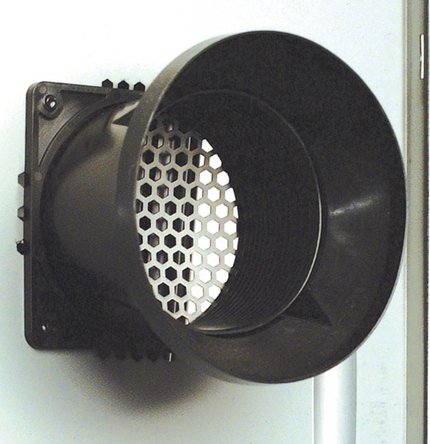 Some case makers, including Antec, offer replacement side panels for some of their older case models. The new side panel includes a TAC duct and shroud. If your case has a replacement side panel available, you can upgrade the case to TAC compliance simply by installing the new side panel. Of course, there aren't any TAC Police breaking down doors to check for TAC compliance, so the real reason for upgrading to TAC is to keep your processor running cooler and more reliably.

Some cases are not technically TAC-compliant but are designed to accomplish the same goal. For example, the Antec Sonata II, shown in Figure 15-4, is not TAC-compliant. Instead, Antec designed this case with a chassis air duct, visible as the dark gray area at the left of the case, that enhances cooling of both the processor and the video card. 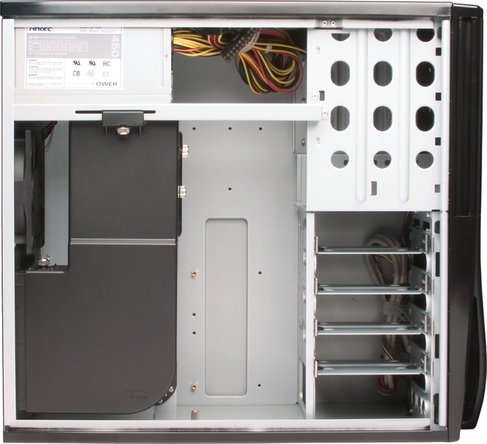 Similarly, the Antec P180, shown in Figure 15-5, is not TAC-compliant, but is engineered to minimize noise and maximize cooling. The P180 reverses the usual arrangement, putting the power supply at the bottom of the case instead of at the top. The power supply is contained within its own air chamber to keep the heat produced by the power supply out of the main area of the case interior, and is cooled by a dedicated 120 mm fan. The motherboard and drive areas are cooled by two standard 120 mm fans (rear and top), with provision for adding a third 120 mm fan at the front and an 80 mm fan for the video card. 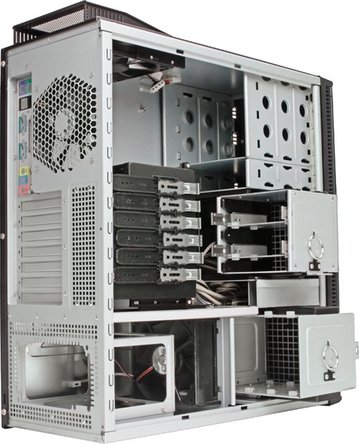 Cases vary widely in how easy they are to work on. Some use thumb screws and pop-off panels that allow complete disassembly in seconds without tools, while disassembling others requires a screwdriver and more work. Similarly, some cases have removable motherboard trays or drive cages that make it easier to install and remove components. The flip side of easy access is that unless they are properly engineered, easy-access cases are often less rigid than traditional cases. Years ago we worked on a system that experienced seemingly random disk errors. We replaced the hard disk, cables, disk controller, power supply, and other components, but errors persisted. As it turned out, the user kept a stack of heavy reference books on top of the case. As she added and removed books, the case was flexing enough to torque the hard disk in its mounting, causing disk errors. Rigid cases prevent such problems. The other aspect of accessibility is sheer size. It's easier to work inside a large case than a smaller case simply because there's more room.

For basic systems, the power supply fan and CPU cooler fan may suffice. More heavily loaded systems those with fast processors, multiple hard drives, a hot video card, and so on require supplemental fans. Some cases have little or no provision for adding fans, while others provide mounting positions for half a dozen or more fans. In addition to the number of fans, the size of fans the case is designed to accept is important. Larger fans move more air while spinning more slowly, which reduces noise level. Look for a case that has mounting positions for at least one 120 mm rear fan and one 120 mm front fan (or already has one or both of those installed). Provisions for additional fans are desirable.

Cases run the gamut in construction quality. Cheap cases have flimsy frames, thin sheet metal, holes that don't line up and razor-sharp burrs and edges that make them dangerous to work on. High-quality cases have rigid frames, heavy sheet metal, properly aligned holes, and all edges rolled or deburred.

PC cases have traditionally been made of thin sheet steel panels, with a rigid steel chassis to prevent flexing. Steel is inexpensive, durable, and strong, but it is also heavy. In the last few years, the popularity of LAN parties has increased, fueling a demand for lighter cases. A steel case light enough to be conveniently portable is insufficiently stiff, which has led case makers to produce aluminum cases for this specialty market. Although aluminum cases are indeed lighter than equivalent steel models, they are also more expensive. Unless saving a few pounds is a high priority, we recommend you avoid aluminum models. If weight is important, choose an aluminum LAN party case, such as the Antec Super LANBOY case, shown in Figure 15-6. 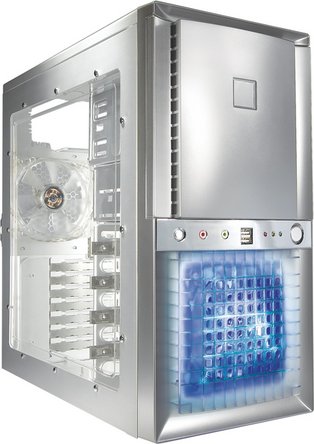 I had a Antec SLK2650BQE mini-tower case , its a dust bucket. It was totally impossible to keep clean no matter how many times I cleaned it and adding dust protection to the CPU cooling tunnel only made the CPU overheat so that didn’t work either. I found the external panels to be cheap and easily warped. I still have this boat anchor sitting in a closet somewhere simply for parts for other cases. Its a dinosaur.