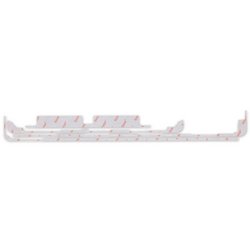 Replace the custom cut adhesive strips that secure the front panel to the case compatible with the 2nd generation 12.9 inch model A1670 and A1671 iPad Pro tablet.

The iPad Pro 12.9"s are physically identical between the first and 2nd generations. However, the 2nd generation has a rear camera "bump" as a result from the upgraded camera system, as well as including a TrueTone LED flash. The rear microphone has been moved away from the camera area and now resides in the center near the top edge. The model number can be found on the back: A1670 for the Wi-Fi only model, and A1671 for the Wi-Fi plus cellular model.