Replacement parts for your LG G Pad 10.1 to fix your broken tablet! 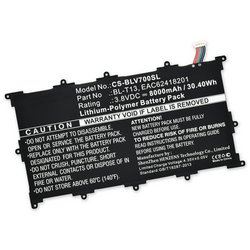 The LG G Pad 10.1, released in July 2014 with model number LG-V700, is an Android powered tablet featuring an IPS LCD capacitive touchscreen with a 1280x800 resolution, a quad-core Snapdragon 400 processor, 16GB of storage, a microSD card slot for a memory expansion of up to 64GB, and a 5-megapixel main camera. Models include Wi-Fi only, 3G and Wi-Fi, and 4G/LTE and Wi-Fi.

The most common repair with an LG G Pad 10.1 is replacing a dead battery.