When something breaks, most people run through the usual gamut of emotions—disappointment, frustration, a feeling of helplessness. But over at the Fixers Collective in Brooklyn, they’re teaching people to approach broken stuff a little differently: with curiosity. 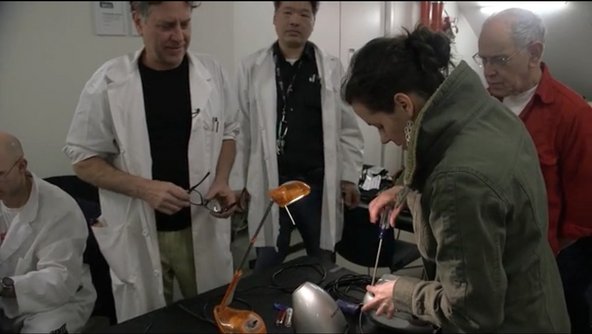 For the master techs that make up the Fixers Collective, repair is the new Rubik’s Cube. It’s a puzzle that must be teased out by trial and error—a Sherlockian game of wits that pits man against machine. Can you outsmart entropy? Can you resurrect the machine? Can you beat ‘broken’?

“It’s intellectually a detective story. It’s a chase. You are thinking of who designed it, how they designed it, what’s wrong with it,” fixer John Murphy explains to the crew of NY City Lens, who recently dropped by to document one of the Fixers Collective’s monthly repair clinics.

“You plant the seed in somebody’s head that they can actually fix something,” Murphy explains. “You give them the power and they’ll move on and they’ll show somebody else. And that’s what we want.”

Check out the full episode that NY City Lens made on the Fixers Collective above.

The Fixers’ Collective: Fixing Phones and Fixing the World