Sometimes we get really nifty things in the (electronic) mailbag: Recently, a video we got from Nathan Hanson and family has given the whole office a pretty serious case of the smiles. 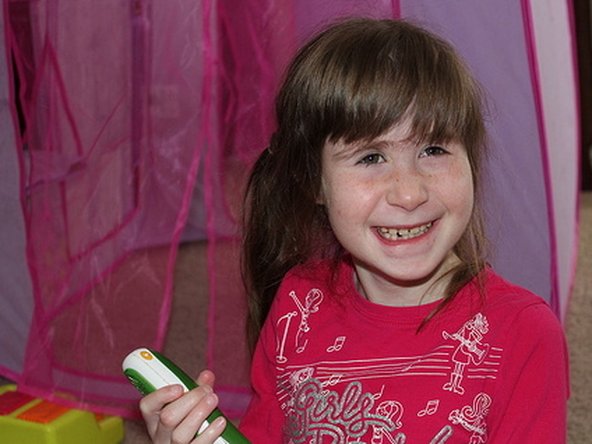 We met the Hansons last year when Nathan—an intrepid fixer—successfully replaced the battery in his daughter’s iPhone. Whitney has a rare genetic disorder, 1p36 deletion syndrome, which makes hearing and speaking difficult. Whitney relies on her iPhone 3GS, and an app called Proloquo2Go, to help her communicate. The new battery gave Whitney’s iPhone a new lease on life.

“Everything was going great until that summer when Whitney’s poor battered old phone got dropped in the driveway during a visit to grandma and grandpa’s house,” Nathan explained in his blog.  “The screen was shattered and we figured the phone was a goner.”

Fortunately, Whitney was able to borrow an iPad from her school—but the larger tablet wasn’t nearly mobile enough for the active 9-year-old. Last week, Nathan decided to resurrect Whitney’s phone one more time.

Nathan broke out his tools and our iPhone 3GS screen replacement guide. Soon, the phone was good as new. Thanks to her Dad, Whitney reclaimed her voice once again. “We gave the phone back to Whitney and she walked around the whole rest of the day excitedly telling people about how her phone was broken but now it was fixed,” Nathan said.

Nathan’s wife Melanie recorded Whitney’s reaction to the newly-repaired phone. Oh man, right in the feels! If this video doesn’t leave you smiling—well, then you just don’t have a soul.

Want to know more about this family of fixers? Check out the full story on Nathan’s blog.