The French do things differently. Lately, that includes showing people the real cost of new devices, not just the price.

Apple, Samsung, Microsoft, and other companies who sell smartphones, laptops, and a few other devices in France are grading their own devices on repair. They put their total score out of 10 right next to the price, wherever they sell. It’s a big step forward, and we’re excited, even if France’s scores and theirs are sometimes different. Allow us to explain.

France’s repairability index takes a wide view on making devices last. The system gives five different categories even weighting: documentation, disassembly, spare parts availability, spare parts pricing, and product type-specific items, like update and reset software for phones. Manufacturers rate their own products, using a weighted spreadsheet that adds up to a total score out of 10. You can see how it works in practice in our post on how two similar iPhones wound up with different French scores.

Here’s a big, stylus-friendly example. We gave the Note 20 just 3 out of 10 points: we liked the non-proprietary screws and modular components, but loathe the glue-caked opening and painful battery and screen repair process. Under France’s criteria, the Note 20 rates an 8.1 out of 10. A big part of that score involves things Samsung is now offering in Europe but not in the U.S., like freely downloadable repair manuals and reasonably priced and fast-shipping spare parts. The Note 20 cleans up in the categories where the iPhone 12 falls down, and ends up 2.1 points ahead in its overall score.

On disassembly, specifically, the Note 20 scored a 7.0, while the iPhone 12 earned a 5.9. We don’t have the detailed score sheets for either phone, so we can’t see exactly what makes up the point gap. But the French system rewards common screws rather than Apple’s Pentalobes, and puts the most weight into removing common components, including cameras, in as few steps as possible. And the way overall scores are figured, 8 out of the 10 total points don’t involve disassembly; if a device is hard to open, but still has a robust post-purchase support system, it can seemingly score pretty well.

Is the difference between our score and the French score a concern for us? In short, no. France’s repairability scores are a win for everyone on the planet. Samsung, the world’s largest smartphone maker, is putting full repair manuals online in Europe, bolstering its parts sales, and will do whatever it can to stay competitive on its score. Samsung is not a company known for bold ecological initiatives, at least in the U.S. In France, they’re like a different company.

iFixit has been scoring devices for their repairability for more than a decade—we started ratings with our teardown of the iPhone 4 (CDMA version). To our knowledge, it was the first repairability scoring system in the world. Our scoring approach is focused on what repair is possible for regular people without extensive repair experience. We buy the same retail units as customers do, try our best to open them up without damaging components, and share our findings as we move along. We take apart devices first so that fixers can learn from our attempts.

There is some overlap with the French system—iFixit provided some input as France developed their index. Like the French scores, we reward the availability of service manuals and the accessibility of commonly broken and worn-out parts, like screens and batteries. But the French system is focused on developing a broader circular economy, not influencing device design specifically. Both scoring systems can move the global needle toward better products and less e-waste.

We’re excited to see an entire nation embrace thinking beyond the price tag. We’ll also keep a close eye on companies that inflate disassembly and documentation scores (if you see any manufacturer scores that don’t jive with your view of reality, drop us a line). The only thing better than companies striving to outdo each other at helping people repair their products is people actually doing it.

Meanwhile, we are going to continue providing the same independent, expert serviceability scoring that you all depend on. 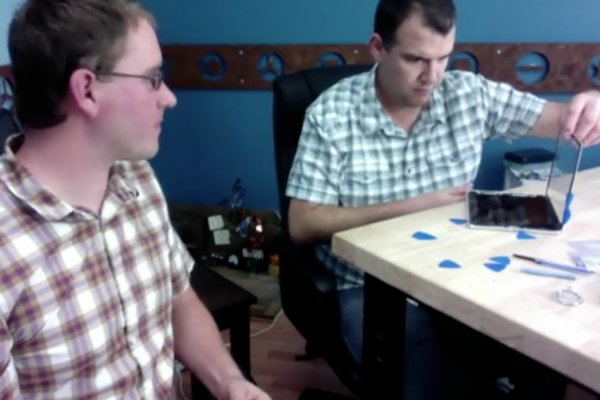 iFixit was first! It took a country to make it important!

OK Makers! The shot was just in front of your bowline are you going to take a different tack? Making a more repairable device?

I’m sure the next shot will be a lot closer if you don’t change your ways!

These scores should take into account the usability of the device after a part has been swapped. Sure it takes 4 screws to replace the home button but you never get the TouchID back, same for TrueTone, battery health, FaceID and many other features.