Right now, your smile is probably hidden behind a mask whenever you see people. But dental hygiene is still important, and Oral-B knows it. That’s why the manufacturer launched the iO (German page), a Bluetooth-connected, OLED-display-having toothbrush in August 2020. After all, plaque and bacteria aren’t in quarantine!

Oral-B placed its first electric toothbrush on the market in the early 1960s. The modern-day iO has been loaded with so much technology to give you a bright white smile, it’s easier to think about it as a smart dental appliance than a simple toothbrush. We were fascinated by this totem of micro-controlled dentistry (or possibly embedded electronic overkill), so we took it apart and took pictures.

Straight from the beginning we can say: if you have a hard time putting down your smartphone, even while brushing your teeth, you will love (or maybe self-loathe) the iO. The iO’s companion smartphone app connects via Bluetooth and recognizes which areas of your mouth were sufficiently cleaned and which still require more attention. In addition, an LED ring on the toothbrush neck and an integrated OLED color display give you direct feedback on your brushing. The screen can do other things, too, like wish you a good morning when you switch on the device. Some mornings, it might be the only “good morning” you get, so that’s nice.

Now that our teeth feel flawless and we’ve met our new friend, it‘s time to take a look inside.

At first glance, the Oral-B iO does not offer any obvious hints how to open it—no screws, nothing to get in behind the brush head mount. But on closer inspection, three shallow plastic edges on the bottom of the magnetic charging pod fit into the recesses at the base of the toothbrush. Turning the toothbrush 90 degrees, the magnetic cover can be released, and we have easy access to the inner parts of the toothbrush. The way they pull out of the plastic body reminds us of young Skywalker’s podracer engines. However, this opening mechanism is nothing new, and has already been used in a less sophisticated way on other toothbrushes like the Oral-B 7000.

We are pleased that the Sanyo 3.7V, 740 mhA battery can be removed from the toothbrush unit by hand. We are not so pleased that Oral-B does not refer to it, or suggest replacing it, in the included instructions.

The light ring on the neck of the toothbrush is illuminated by a single indirect LED strip on the head of the motherboard. This light ring doesn’t just match whatever color you set for it, it can indicate too much pressure on the teeth (red light) like previous models, but also the correct pressure point (green light). The brush sense the pressure you apply while brushing through a hall effect sensor on top of the motherboard, which measures the magnetic field of a small magnet on a flexible piece of plastic. When pressure is applied to the brush head, the magnet moves closer to the sensor, which in turn detects a different strength in the magnetic field.

We continue with our disassembly and take a closer look at the motherboard and its components. The first thing catching our interest is the OLED screen, because removing it looks like a tooth-grinding exercise. While the display itself is attached to the motherboard with a small adhesive strip, the display cable unfortunately does not have a ZIF or snap fit connector, but was soldered instead. This makes a display repair much more complicated.

The same applies to the motherboard. The two contact points of the motor and the two contact plates of the battery have to be de-soldered in order to remove them. Besides the hall effect sensor and the OLED screen, we find two buttons, a motor driver and bluetooth wireless micro controller from Texas Instruments, a Cypress micro controller, a Winbond flash memory chip, and the charging coil, which is soldered to the bottom end of the board.

After some serious de-soldering, only the plastic frame with the attached toothbrush motor remains. The motor is secured by Torx 8 screws and can be pulled out of the midframe easily, after removing the brush head mounting. This is not a “regular” rotary motor but a frictionless coil motor, which generates a linear up-and-down motion without the need for a cam and gear. The brush head is mounted directly onto the magnetic top, which results in a back-and-forth rotation of the brush head via a deflection mechanism. The attention to detail seems to pay off: the iO, with its averaging 70 dB in operation, is slightly more quiet than other Oral B models, usually running at 75-80 dB.

Out of curiosity, we take a quick look into the swap-able brush head, to see if Oral-B snuck any electronics in there. After neither twisting, pulling, levering, nor any other efforts show any effect, we decide to be a little more rough and pull out our rotary tool for some additional bite. A few seconds later, the plastic case reveals its inner life.

Inside we find the brush head mounting with deflection mechanism as well as the magnetic pin, which is attached to the upper end of the motor. Seems like the part of the toothbrush responsible for cleaning our teeth is the only one in the toothbrush that is completely mechanical and has no electronic components.

As far as reparability is concerned, it is worth noting that the battery can be removed from the toothbrush in a few easy steps and without tools, even though Oral B does not provide instructions for this. Though we’re not happy that pretty much every repair requires a soldering iron—which is time-consuming and requires some prior knowledge—we have to mention that there is no use of adhesive in the toothbrush, except for a narrow strip below the display. In the entire toothbrush only four uniform screws are used, but being Torx 8 screws, that’s not so helpful for the average consumer.

For more electrifying oral hygiene you can check out our Electric Toothbrush Repair page. And for more teardowns you can follow us on Twitter, Instagram, and Facebook. For iFixit delivered, check out our newsletter. 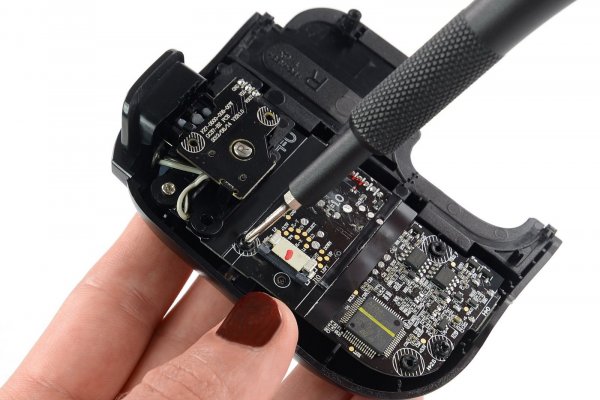 Will there a teardown of this posted as a guide?

I would assume that the soldering of the display is to keep a ZIF socket from coming loose from the vibration of the mechanisms.

After the coming apocalypse, can I still use it manually by moving my hand and wrist?

This is so cool. Very impressed. My dentist gives me a tooth brush! Interesting world.

Could you help to take a picture for every ic on the PCB ?