Note: This post was originally published Aug. 14, 2019. We’re posting it again now because we figure it’s a good time to look into free, cheap HDTV programming options, while you might have a bit of time.

Almost everything about the modern TV experience has become smaller and better. TVs, game consoles, even streaming devices are thinner and more powerful. There is one area where smaller is not better, however, and that is antennas.

It might seem logical that technology has advanced to where a small, paper-thin antenna stuck to an inside wall can do the job that set-top rabbit ears or roof-mounted poles once did. But unless you happen to live within a lucky nexus of strong signals, your small antenna cannot defy the physics of distance and frequencies, and you’re missing out on free channels.

Might I humbly suggest a radical fix: don’t buy a new antenna (or three, like me), and don’t pay for cable or a live-TV package. Instead, build a cheap, weird, but highly effective four-foot antenna, possibly with hardware you already have. With the different wall-mounted antennas I tried, I received 15 channels, and only two major HD networks. With the antenna I built in 30 minutes on a Saturday, with about $15 in materials, I jumped to 35 channels and all five of the area’s major networks in high definition (with better picture and sound).

If you have a place you can hide this antenna, preferably higher up in your home, or you don’t mind your handiwork being visible, you’ll end up with a truly effective indoor antenna. You can run coaxial cable from the antenna to a TV (or two, with a splitter) and watch live HD television. You can get TV on your computer or laptop with a USB tuner. Or you can set up your home network to watch TV on nearly any device, with a network tuner like the HDHomeRun. This thing that looks like a prop from a conspiracy theory website works just like any antenna you can buy in a store, but better.

Let’s screw some wire onto a wood board, get way better reception, and stop buying new gear to watch the TV we can get for free. 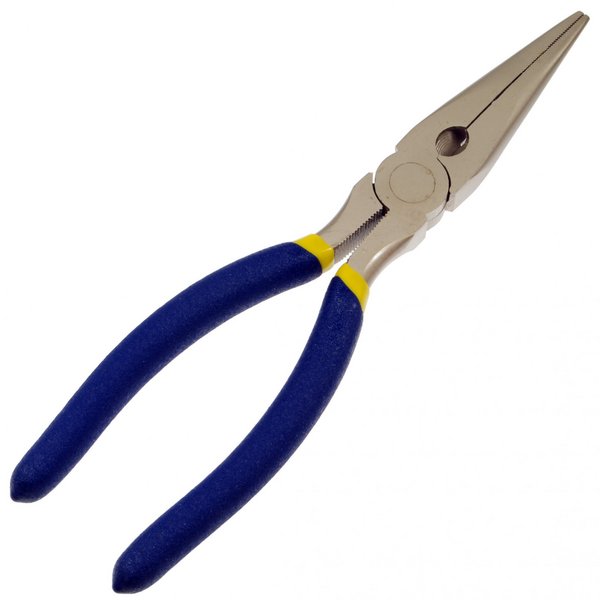 Heavy duty pliers with cutter for all types of grabbing, twisting, and pulling.

I learned how to make a DIY HDTV antenna from John O’Brien, who hosts occasional Cutting the Cord workshops at the University Heights Tool Library and aims to spread throughout Buffalo, NY. (A bit of disclosure: I’m a board member of Awesome Buffalo, which awarded a grant to O’Brien’s project).

O’Brien had done a fair amount of research on how to make a good HDTV antenna, and use it to good effect. He told me that one of these DIY antennas, with four pairs of antenna “whiskers,” is like daisy-chaining four flat-wall antennas to each other. Flat-wall antennas often have one medium antenna pair, or two small pairs. He recommended this video from CBC host Giacomo Panico in Ottawa as a good tutorial for those who can’t make the flight to Buffalo for his workshop (but, seriously, great wings, wonderful parks, Niagara Falls is worth it, stop by). The video takes you step by step through the building process, but I’ll outline it here.

Put a washer over each point you marked, then lightly screw into each point, but not all the way. Leave enough room so that the washer can fit your wire underneath. 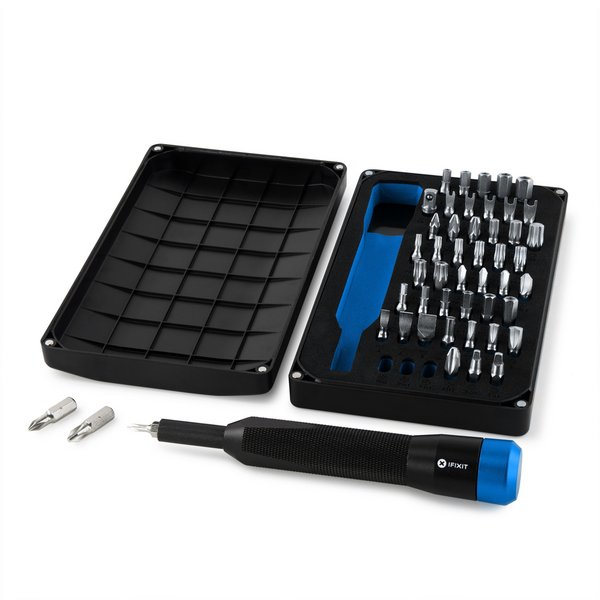 Cut a length of wire about 30 inches, or a bit more if you bought lots of it. Watch this part of the video. Starting from either bottom screw, your wire will cross over to the next screw up, run up through the next two screws, then cross over again to the top-most screw on the other side. Repeat this for the other side, except: one of the wires at each cross-over point needs a bit of an arc, so that one wire can pass under the other without touching. See that part of the video.

Now it’s time to make the “whiskers.” Each of these is 19 inches of wire, bent in the middle into a V shape, so that each side is 9.5 inches long, and the ends are 4.5 inches apart. Here is where you could use unbent wire coat hanger, if you cut them up. The eight whiskers fit underneath the washers, except for the middle set, which you’re reserving for the antenna-to-cable balun. You want the whiskers and the through-wires touching each other, under the gentle, conductive pressure of the washer. Screw each one down.

The last step is fitting each of the balun’s prongs underneath one of the washers in the middle set of screws, then screwing down to secure it. Double-check that your whiskers have their tips 4.5 inches apart (both within the whisker pairs and between whisker pairs), and that the wires crossing over each other on the board are not touching.

These diagrams (part one, part two, both PDFs) detail the measurements and rules. They slightly disagree with our amiable Canadian video instructor, calling for 5.5 inches between whiskers. You can experiment to see who is more right, but it likely won’t make much difference.

Positioning and Hooking Up Your Mad Max Antenna

The best possible setup for your antenna would be as high as possible inside your home, while still being a short distance from your TV. Failing that, you’ll need to work out some compromises.

The best bet for reception is higher in your house, because the signals this antenna is catching are line-of-sight. A higher position means fewer spots where other buildings and structures can impede the signal. Putting it near a window can help, though avoid windows with metal mesh screens, if possible. And don’t put it outside, because the wood and bare copper won’t survive.

Which way do you point this thing? Ah, now it might get tricky. Type in your address at TV Fool, AntennaWeb, or try both (I find AntennaWeb easier to visualize, but TV Fool has more data). You’ll see the angles of transmission to your antenna. Sometimes all the channels you care about most come from one direction. Sometimes you won’t care enough about an outlying channel to reach for it. Otherwise, you’ll have to strategize and use a compass (or compass phone app) to point the front of your antenna, with the screws and whiskers, toward the best combination of signal lines.

You could wrap a board in foil and place it behind the antenna to capture and reflect signals back onto the antenna from a certain direction, but that cuts off signals that might reach your antenna from the rear. Use this only as a last resort.

After you’ve got a decent start for your positioning, connect a coaxial cable to the balun. Run cable to your TV or tuner. Most working TVs these days have a coaxial port and the ability to scan for HD channels built in. If your TV does not, you’ll need a digital converter box (which is not the same as a cable box). Whichever tuner you’re using, screw in the cable, scan for channels, and watch a few of them for a little bit.

Unlike the analog reception of yore, digital HDTV signals don’t come in fuzzy if they’re weak. Instead, they cut out intermittently, leave “artifacts” around the screen as the picture moves, or don’t show up at all, with a “weak signal” error on the screen. Adjust your antenna, rescan, and reassess. Small changes in the angle can make a big difference—I made one 10-degree change and lost about 15 channels. Find a solid combination you like, then secure your antenna to that angle.

Your reception will not always be just like you set it up. Everything from precipitation to LTE signals to sunspots can affect the strength of different channels. But it’s usually a lot better than a more expensive wall antenna, and you get to watch TV that you captured with your own ingenuity. It’s a cool feeling. 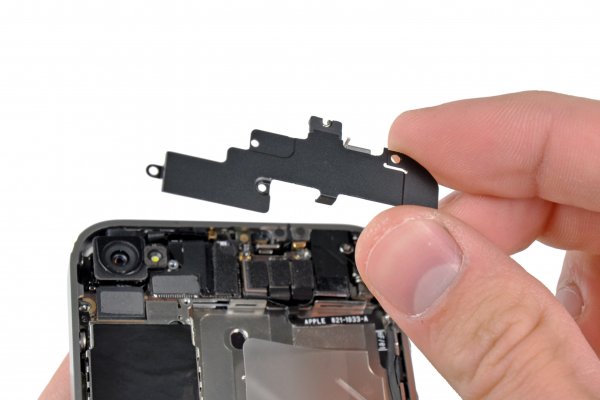 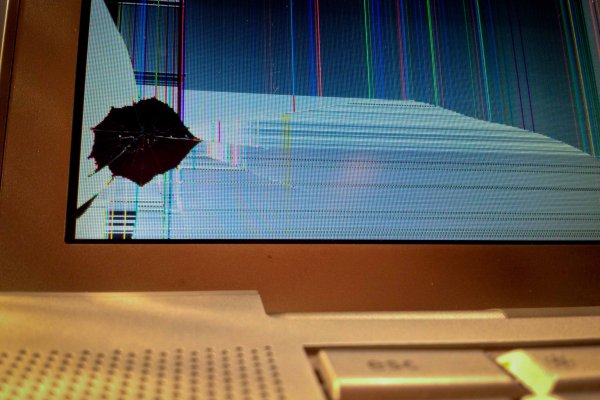 Kevin and all, the antenna you built will be okay for many users, but the absolute champion DIY antenna by every objective performance measure is the Gray-Hoverman: https://www.digitalhome.ca/threads/intro... and it is easier to build than the 4-bay bowtie you’ve built. There are loads of tutorials online to show how simple yet powerful the GH antenna is. :)

Also, for those who want to deep-dive into DIY antenna technology the following site is comprehensive:

You can use this example, with different lengths to make great ham radio antennas. You can find some antenna calculators on sites like https://www.changpuak.ch/electronics/yag...

I really enjoyed the article, however, I’d wish folks stop perpetuating the HDTV antenna myth … there is no such thing as a HDTV antenna. All you need is any quality antenna that can pick up VHF and UHF signals … I still have my 25(+) year old Radio Shack roof antenna and it still does a very good job of picking up signals today.

It was si=uggested this antenna must be kept indoors. Can someone elaborate on that? I understand the Balun must be kept in a weather safe cover but how does weather adversely affect the copper? Does it not work if it has some oxidation on the surface? Thanks for your replies. I am looking for something that can be mounted outside.