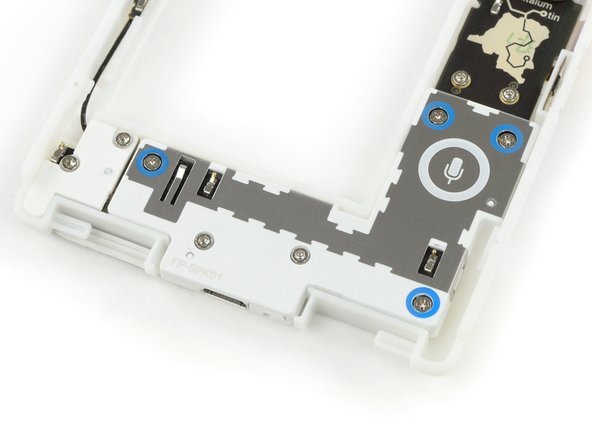 This guide will show you how to replace the microphone module of the Fairphone 2.

92 other people completed this guide.

Just a little comment. I have seen many times the so called primary microphone error of the fairphone2 on the internet. I had the problem but it had nothing to do with the microphone but with the electric connection/module to the display module. If you have this problem you can check whether the mic works fine if you press tightly together the phone around the microphone module (just call another phone and try it). If this helps, there is a good chance that the true reason are worn out plastic parts around. I fixed it by putting a millimeter of tape underneath the microphone module and before screwing it on again. Now the module gets pressed a little bit against the display module and works just fine again (for the moment). Probably the little worn out outer shell was a part of the problem, I did not have a new one, but could imagine that buying a new outer shell for the fairphone2 might rather solve the problem than changing the microphone module. Just try it yourself before ordering a new microphone.

Thanks! That did the trick.

On a side note, love the ability to open up and adjust my phone!

The "millimeter tape fix" has been working fine for about a week, but now I'm back to square one: still no sound at the other end. I ordered a new hard cover but still to no avail... And Fairphone is still out of microphone modules. I'm out of options, I guess I'll just send my FP2 for repair, hoping it won't take too long.

Thanks for the advise!!! I also had problems that I could hear people calling me, but people couldnt hear me or they heard strange background noices. Seemed that it had to do with loose fitting of the two plastic cover parts close to the microphone module (probably because of friction when plugging in or out charger cord many times, that is close to microphone). I took out microphone part, blow few times, put some tape on the cover, placed microphone back and problem seem solved, micro working perfect without strange noices!!!! Thanks a lot!

I had the same issue. I bent the contact and cleaned both sides with an electrical contact cleaner. It worked fine !

I’m so happy with your ‘little’ comment which made all the difference! Was ready to buy a new microphone module; and saw by accident your comment and it totally solved the problem! So, that saved me 25 euros-with-no-solution! Now hoping it will be a long term solution also!

Same problem, not tried solving it yet - I'm just commenting on mietzekiss' suggestion that a new outer shell might solve the problem. It's possible that caused my problem! My FP2's microphone was fine till till I changed from the original shell/back to the new, rigid two-piece shell/back. I haven't got near solving it yet because although the two parts of the shell/back were easy to separate when they came out of the box, I now can't get it off the phone … About to try harder …

Solved, though I don't know what the root problem was. Like others, when making a call the other person could hear me, but I couldn't hear her/him unless I had the phone on loudspeaker, so it was a microphone problem. There was (above) a possibility that the new FP2 'slim case' ( 'shell/back') caused the problem. I succeeded in getting it off: fingernails weren't strong enough, so I manoeuvred the blunt end of a metal nail-file between the screen and case, while pleading with all the gods I don't believe in that I wouldn't scratch the glass, and lifted it enough to get fingernails in and get it off. I did nothing to the FP2 aside from blowing round the microphone in case it had (how?) got dirty. Put the cover back on, and behold, it's working. I'm quite sure it was fitted correctly before - tight all round - so no idea what I've done to make it work. Good luck all!

Super easy fix. I only had a hard time removing the display. But that also worked out. Thank you! Also for the quick delivery!

Ok, had the same problem. Mic only worked when pressing together backside and display ... quite bad quality.

Thank you so much for this tutorial! I am so pleased I managed my first phone repair ever. Thanks for the clear guidelines.

The display removal is a bit tricky, but otherwise it's very smooth and easy!

Thanks for our Fairphones!

After falling down from the top the mast (15 metres high !) on the hard deck of a yacht, my Fairphone2 is still working !! What other phone would have survived to such a crash ? But since there, the microphone is sometimes not operating at all... Does anyone can help me to diagnose the disease ? Thanks

Thank you, excellent article, I found removing the screen module a bit tricky but got there eventually.

I hsve tested mine in setting and it appears to work fine. I will ring someone up and find out if they can hear me.

Thank you very much for the explanation! The instructions are super clear :)

Thanks Tobias. These instructions are very clear, but I am having to do this for the second time and I find that the main microphone works after a fashion if I squeeze the phone near the assembly. As soon as I release the pressure it stops working.

I found the #00 Philips from my Draper 6 piece jewellers set worked better than the suggested #0. Small tweezers also proved useful.

Be sure to work on a tray or plate with an edge to stop the screws escaping.

I too had problems with the primary mic. Went on for sometime before I realised as callers were getting some pick up from the ambient mic and I put problem down to poor reception. Fairphone supplied a replacement part as phone just in guarentee period but now, Sept 18, the new mic is going. I had just swopped case but problem did not emerge for a few days. TBH I am really fed up, there is clearly a design fault here? I will be contacting Fairphone to suggest they address this and issue a fix. What is the point of a longer lasting phone if it is not longer lasting?

Been there, done that! Bust primary microphone replaced in 6 minutes, all fine! AND only 5 days since I placed the order for a replacement module. I love it! True, the front was a bit tight - and I used a straight mini screwdriver as I couldn’t get a mini philips to turn the screws. But hey! If that was an iPhone (excuse language) I’d be waiting weeks - and replacing the whole thing. YAY

Hi everyone; this just in, just to add on the DIY approaches to this issue: consider cleaning the contacts on the back of the *display module*.

The grey pad on the back of the display where the microphone module makes contact (there are three such areas) should be shiny. Mine were dull, and somehow oxidized. I scratched them shiny again using the tip of a screwdriver, and now when I test (using Skype test call, for example), the recording no longer sounds muffled!

I was starting to think (based on the poor quality before, which was sometimes muffled, sometimes completely gone with a weird ground-loop noise) that this must have to do with the microphone module itself, whose rubber has decayed. I tried opening the module itself: don’t bother and don’t risk it.

If milimeter tape isn’t helping, or you don’t want to just push a charging cable in hard whenever you talk, try inspecting the contacts!

I also tried bending up the pins on the microphone module so they would push harder. Not sure if that also helped.

This is driving me pretty bonkers. Sounds like the same problem that Barry Rawn - above - describes. Just going to have to be more ruthless re cleaning those contact strips on the back of the display, and bending the three sprung contacts forward out of the microphone module. Squeezing the bottom centre part of the case reconnects the microphone…………layers of insulation tape inside the case are not winning the battle………Any other wisdom appreciated. Really not too fussed about the rest of the phone right now - but a working microphone kinda helps. Something for Fairphone to address.