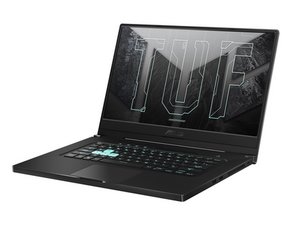 Released in 2021, the TUF F15 features an Intel Core i& processor, NVIDIA GeForce RTX graphics, and a 15.6 inch anti-glare display.

Why can't my laptop stay on more than 20 seconds?

My ASUS TUF Dash F15 has suddenly stopped working. It was manufactured in January 2021 and I owned it ever since. It crashed twice (instant black screen) and now it won't turn on correctly.

I can quickly glance at the BIOS before it shuts down, it says the fans are not turning. The CPU heat slowly goes up, I think it shuts down around 50 degrees celsius? The battery seems to be charging, last I checked it was at 83% and I see no bulging (I unplugged it still to be safe). Tried different power adaptors and sockets, same result.

I'm assuming there's a problem with the power or the fans (or both)?

A few warning signs that may be related that happened before this breakdown:

What would be my best course of action? Asus repair service is awful, and my partner and I never repaired a laptop before, only desktop computers. I didn't see any guide on the website for this laptop model; and even so, how do I diagnose the exact source of the issue?

Thanks in advance for your help!

Attached are photo of the inside and video when the laptop shuts down with BIOS open.

A thermal sensor is likely being paranoid and thinks the processor is overheating.

Thanks for your answer. What would be the best way to test if that's the case and how could I fix it if the problem comes from that?

@irobin If the sensor is on a cable, try reseating it.

I tried opening up the laptop but I have no idea where to find a thermal sensor. I know little about hardware. I attached a photo of the inside and a video of the BIOS when it shuts down in the edit of the OP. I’m considering bringing it to a repair shop since it seems hard to fix (for me at least) but I would still appreciate suggestions.

@irobin The fan may be faulty. Find a person who has this capability and tell them about the problem.