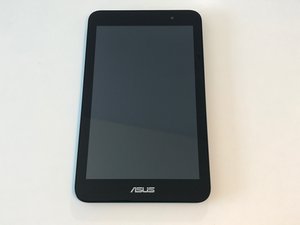 The Asus Memo Pad 7 ME176C is available with storage capacity options of 8 or 16 GB, a 1280 x 800 display, and front and backwards facing cameras. The Asus Memo Pad comes in a variety of colors such as Black, White, Red, Blue or Yellow.

Can you point where the WiFi antenna is located please?

Was it dropped or damaged in any way?

Not that I remember.

I was trying to see if the wifi antenna was unplugged but I haven't locate it on the inside of the tablet yet.

Its.located on the back of the unit theres some pins attached. Check for damage and make sure its connected solid or you'll have issues . Chip is x86

Is the chip x86 located on the motherboard or on the down side of the tablet near the speakers?

Does the tablet’s WiFi detect your home WiFi network if you use the tablet as close as possible to the router i.e. <15cm?

Looking at the part number from this supplier shows what it looks like. It seems that the antenna is housed in a plastic module.

Hopefully this may help you to locate it, as I cannot see it in any of the images shown in the ifixit Asus MeMO Pad 7 ME176C Repair guides. Perhaps it is under the back cover?? If it is on the back cover then the WiFi chip should be on the motherboard close to where the antenna connects to the motherboard via the spring connectors as you would lose too much signal strength if it is a lot further away.

Unfortunately I cannot find an image for the other antenna part number (14007-01750100) shown in the parts list to check what it looks like in case it is a lot different.

Thank you for the quick response.

I read here https://wiki.archlinux.org/index.php/ASU...)) that they share the same antenna for both WiFi and bluetooth but still couldn't locate it in the unite after removing all the screws.

I wasn't able to remove the main board completely due to the main camera stripe that wasn't very accessable to reach and unplug.

BT and WiFi use the same frequency (2.4HGz) so they will share the same antenna.

Does the BT work OK then?

If so then it is looking like a WIFI only problem which is unusual as a lot of the time they're in the same chip on the motherboard.

Did you try using it very close to the router, you didn't say? If it is not picking up the WiFi when you are virtually touching the router with the tablet then it is not an antenna problem but either a WiFi hardware or software problem.

Try starting the tablet in safe mode and check if it now detects any WiFi networks.