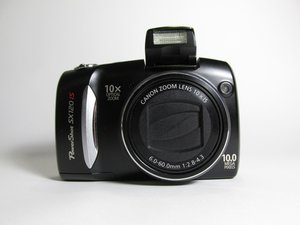 My camera won't turn on, how do I fix it?

I dropped my camera recently and I've tried various times to turn it on but it refuses to do so.

Please help me in locating sensor in SX120 IS . I tried to find but no luck..

Holding the camera upside down with the battery door open and the SD chip closest to you, the micro-switch is white. it is to the left of the SD card, immediately to the right of the black plastic protrusions which might act as a catch for the latching mechanism. We have 2 of these cameras. The one that is working has the white micro-switch which moves down when you push on it. The broken camera seems to be missing this white micro-switch, and it will not turn on.

May please u show me white-micro switch on a picture. I think mine is the same problem.

Thank you, thank you. This was the first site I tried and yours the first answer. My micro switch had become jammed. One poke with a paper clip and, voila, fixed. Yea

Thank you , very much so how do i maintain the micro switch so that it doesn't go off otherwise i think it will go off again though i used the same trick as viola a paper clip and it worked so i am still worried it wont go on again

Holding the camera upside down with the battery door open and the SD chip closest to you, the micro-switch is white. it is to the left of the SD card, immediately to the right of the black plastic protrusions which might act as a catch for the latching mechanism. We have 2 of these cameras. The one that is working has the white micro-switch which moves down when you push on it. The broken camera seems to be missing this white micro-switch, and it will not turn on.

Thank you so much for your detailed description. Would you mind posting a picture so that I can see the switch and it's placement in the camera please?

I found a solution to this question. First make sure the battery's are charged. Second remove the SD card and replace it with a new one. Then replace the lens with another one(you don't have to). Now it should work

I had this problem all I you need to do check the bottem of the cam make sure battery is pushed in. But I'm referring to a safari hd action camera

I was missing the white switch, so I used a small piece of aluminum foil and packed it in nicely. You can see how the switch should look here around 10:12 into the video. Hope it helps. Peace.

If it doesn’t work then go to the authorised service center.

Check the battery to see if it’s damaged or not.

If you need to send it to a pro, remember to take out the SD card in advance.

I have a canon powershot ELPH 180. After 2 years it started acting strangely. First, it wouldn't take movies unless I held in the movie button. Then it started scrolling through the picture roll when I started it up even though I did not have it set to do that. Then it would start up once, but then after I shut it down it wouldn't start again unless I removed and re-insterted the battery. I bought a new battery which reduced the frequency of the issues, but then it started not turning on again. What finally solved it was that I CRC'd every connection.

Get a can of CRC or similar fast evaporating electronics cleaner online or in the back of your local Walmart with the automotive miracle additives. Turn the camera upside down and spray the CRC into the crack around the On/Off switch and photo actuator buttons. Let it drain and dry for 15 minutes. Then open the battery compartment and remove the SD card and battery. Put the little CRC hose in both and spray a bit while holding it righ side up so those cavities drain. Then spray the metal parts around the battery door, and spray the terminals on the battery and SD card.

It was funny, because even after cleaning the camera connections I still had problems with the old battery. But after I CRC'd the connections on the old battery even that worked fine. So apparently these Powershots are very sensitive to even the smallest amount of corrosion on any of the connectors.

In this sort of situation, replacement of the cover and or microswitch would be the solution. Or repairing the cover. Also I found bodging a way to keep the switch pressed in, did it for me. But be warned that you could accidentally switch it on with out the cover closed and could damage the cover more during use. 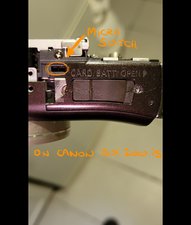 Camera is not working camera is staaak