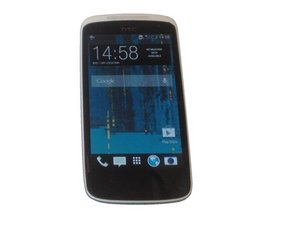 Antenna doesn't work very well after the phone fell to the ground!

Antenna doesn't work very well after the phone fell to the ground! How to solve this problem? and were is located antenna? It's a problem of connectors?

This is not a phone I have worked on, but htc generally builds the antennas into the mid-frame (or loud-speaker). That is the part you see after the battery cover, but you would have to take off the mid-frame to see the logic board.

And unfortunately, there is a few antennas. For this model I would say two internals thats are changeable. (Wifi and Bluetooth) and (Cell - 3G, GSM, HSDPA). If you can spot them the larger of the two is usually for cellular services. The reason behind this is that most cellular frequencies are located lower on the RF spectrum than Wifi, and lower the frequency the longer the wavelength and generally the antenna.

It could also be a semi-seated connection that is causing a considerable loss of signal (rf energy) that makes it to the phones radio.

tl;dr - Check to see if the coaxial jumper is properly seated at both connectors, as well as all of the pressure contacts that lead to the frame. If this does not work try replacing the mid-frame.

I had a similar issue and called Etradersupply thinking I'd order a new antenna however they said these parts don't break for the most part by simply dropping the phone. In my case it was a simple reseating of one of the ends of the antenna. The hardest part was taking my Htc One apart to get to the antenna.and a tech from Etradersupply walked me through that. Total cost for repair? $00.00