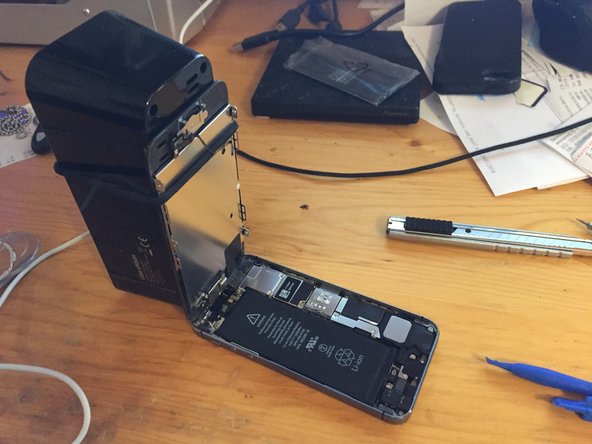 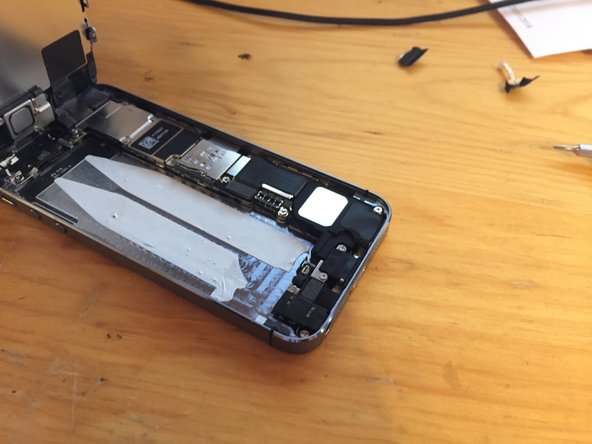 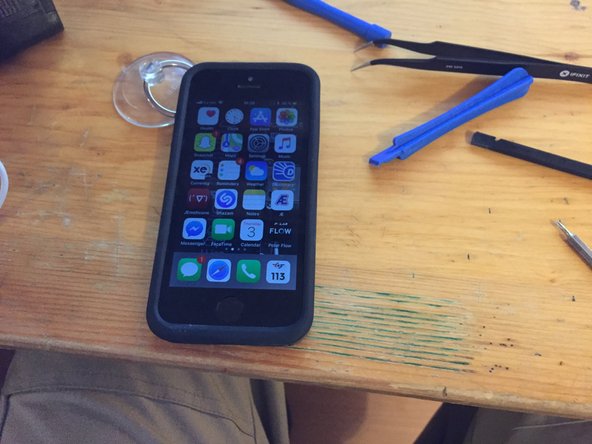 A couple of months ago, my four year old iPhone 5S had a severe shutdown. It was all black, and wouldn't start until after a couple of hours connected to the charger. I panicked, thinking the phone was dead.

Luckily it booted up again, but afterwards I have had to charge my phone every night. If not I would risk a shutdown the following day.

The repair itself was moderately difficult. Firstly, the plastic bezel wanted to seperate from the glass panel. With a handy plastic opening tool, I got the screen assembly up and supported with a hair tie.

(see the first picture; also notice the replacement battery in the background)

The touch ID cable bracket was easily removed with the spudger. With the battery ready to go, I started to work out the adhesive strips, but disaster! I put too much power and tore them both off. Hair dryer and plastic card to the rescue.

I managed to get the battery out, leaving it with a significant bend. Good thing I let the phone shut down at 1% battery level. Removing old adhesive and applying new strips, while making sure to not touch the new adhesive, very important.

Replacement battery goes in, easy. Reassembling the touch ID bracket was difficult. The adhesive tab was in the way due to poor bending and tucking, but eventually I got the bracket on. Assembling the display back on was a little tricky, making sure to get the top of the display in place.

Success! My phone booted up as normal, following a hard reset.

1. Discharge the phone! Even if you are super careful, the battery bends easily.

2. Be patient with the adhesive! Try to be as gentle as possible. Slow and easy does it.

3. Supporting the display 90° will simplify the repair. It also helps preserve the phone.

4. Have a magnetic tray. The screws are tiny! Very handy, if you have a messy desktop.

Tip: Sometimes its good to pry the battery up where the pull tabs start. It creates enough of a gap for the pull tabs to easily do their job.

Nice job on replacing the battery in your iPhone 5s! People don’t realize that many of the components in their devices are replaceable, and that it’s a lot cheaper to replace the parts yourself. Hopefully you’re now more comfortable opening other devices as well.

I would recommend using an anti static wrist strap, Ifixit Iopener (still waiting on it to be delivered) and hopefully you re applied adhesive tape.