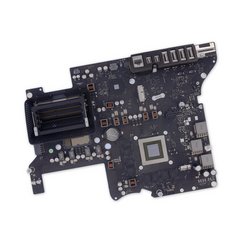 Replace a logic board compatible with the Model A1419 Late 2012 27" iMac. Fix processing issues like unexpected shutdowns, reboots or water damage.

In October 2012, Apple announced an update of the 27" iMac. From the front this machine looks similar to the edge-to-edge glass face of its predecessor, but the new rear aluminum case tapers to a mere 5 mm at the edges. Laminated to the cover glass is a 2560x1440 16:9 widescreen IPS display. External ports include four USB 3.0, two Thunderbolt, and Gigabit Ethernet. Late 2012 models feature quad Core i5 and i7 processors.