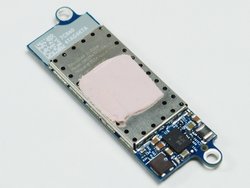 Replace a damaged or malfunctioning 802.11n Airport wireless internal card in your laptop.

In October of 2008 Apple released the MacBook Pro 15" Unibody with a new aluminum case drilled from a single aluminum brick. This model introduced some features that were new to Apple laptops: dual video cards, one for power saving casual use and one for graphics-intensive processing, and a Mini DisplayPort replaced the full-size DVI display connector.

Once you've bought your parts and tools, check out iFixit's MacBook Pro 15" Unibody Late 2008 & Early 2009 repair guides for step-by-step instructions on how to make the fix.