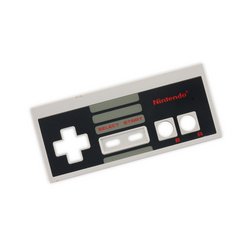 This part is the plastic front panel of the controller for the Nintendo NES-001 console.

The Nintendo Entertainment System (NES-001) is an 8-bit game console released by Nintendo in 1985 and discontinued in 1995.

The Nintendo Entertainment System was the best selling console of its time and developed the business model of software licensing for third-party developers, which prohibited companies from selling games unless they were liscenced by Nintendo. Companies like Konami, Tecmo, Taito, Enix, and Square developed a large portion of the games for the NES. The Nintendo gave birth to many popular game series, such as Super Mario Brothers, The Legend of Zelda, Mega Man, Metroid, Dragon Quest, and Final Fantasy.