Looking to refine the plastic-bodied Galaxy S5 and better combat the iPhone, Samsung presents to the world the sleek new Galaxy Alpha. To us, it looks like they blended an iPhone 5s with a Galaxy S5 and poured the ensuing smartphone smoothie into an iPhone 6 sized package. The result—confusing. Lacking both the waterproof certification found in the S5 and the adhesive-free opening of the iPhone 6, the Alpha seems to be a double-whammy of disappointing resilience and lackluster repairability.

The Alpha suffers the same adhesive-laden opening procedure as its predecessor, this time with even thinner glass. Like in the S5, you have to remove the fragile display assembly to access anything other than the battery. Which brings us to the Alpha’s one saving grace: Samsung continues to maintain its user replaceable battery design, a point we won’t miss praising.

The Galaxy Alpha ends up in the middle of the pack, contrary to its leaderly name, with an inherited 5 out of 10 on the repairability scale.

• Similar to the 4th and 5th generation iPhones, the Galaxy Alpha sports a straight, smooth metal bezel, with a chamfered edge.

• The Alpha managed to squeeze itself into a slightly smaller form factor compared to the iPhone 6—and at 6.7 mm, it’s a whole 0.2 mm thinner.

• On the Galaxy S5, we saw Samsung move to a midframe sandwich design—two halves of an internal frame surround the motherboard under a display panel lid. We assumed this repair-hindering layered design was necessary to waterproof the S5—but unfortunately it carried over to the hydrophobic Alpha.

• Like the iPhone 6, the Alpha decided to reroute its home button cable to protect it, opting to simply detach the home button from the display assembly, so that its cable now routes down into the interior. 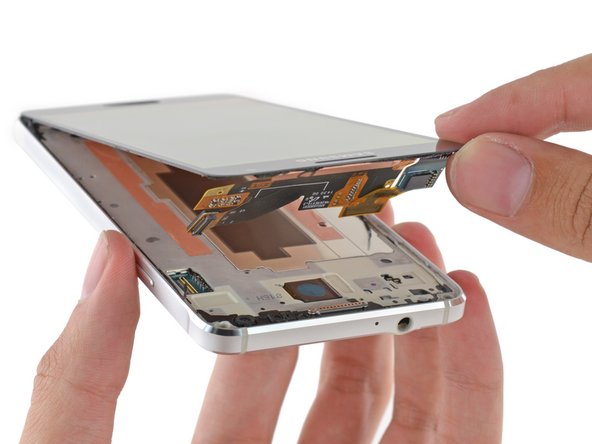 • It took about half an hour of heating and prying around the edge of the front panel before we succeeded in freeing the razor-thin display assembly—at 1.4 mm, it’s less than half the thickness of the iPhone 6 front panel. To add insult to injury, replacing anything other than the battery requires first removing the display, risking extra damage on the way to a repair.