You might have heard of the “one simple trick” to fix Joy-Con drift going around. Turns out, it’s almost as clickbait-ish as it sounds. I hate to be the one to tell you this, but there’s rarely one simple solution to a complex electro-mechanical issue. The good news is for just a smidge more effort than the kinda-fix requires, you really can fix Joy-Con drift!

The fix is in

YouTuber VK’s Channel seems to indicate that a drifting Joy-Con can be healed simply by applying pressure to the case—via external squeeze or an internal spacer. A piece of cardboard as thin as one millimeter puts enough pressure on the joystick sensor to restore full contact and stop drift. For Victorstk, this fix worked flawlessly, turning a badly drifting Joy-Con into one that worked like new. But it turns out there’s a lot more to this story.

As mentioned when we explored PlayStation 5 joystick drift, almost all console controllers use the same joystick technology. That means they use the same materials and suffer the same flaws, only one of which is the plastic deformation mentioned in VK’s video. Other failure modes include sensor wear—the erosion of the resistive material used to measure movement—centering-spring fatigue, and grime. Any one of these can haunt your Link into walking off a cliff. More likely, they’re working together to do it.

But Victorstk had a great pitch and instructions, and we had a few drifting Joy-Cons, so we were excited to try out a (relatively) simple fix.

First we measured the baseline. Our Joy-Con drifted “Northeast” about 50-60% of the time—according to rigorous Animal Crossing: New Horizons testing. Squeezing the controller from the outside, as demonstrated in the YouTube video, didn’t seem to do much: strike one.

So we cracked open the Joy-Con casing and placed some folded masking tape onto the back of the joystick module. This shims the joystick module against the Joy-Con shell, eliminating any play in the stick’s metal shroud. We reassembled the Joy-Con and started to get worried. Even with a mere millimeter extra filler, the midframe was visibly distorted—great news for a deformation fix, bad news if it’s squishing the battery inside the Joy-Con. Batteries may look like they have “extra” space around them, but that space is allotted for natural swelling and as a safety margin.

But did it fix the drift? Sorta! We crossed some more animals and saw about 10-15% drift action—a serious reduction, but not a flawless victory.

TL;DR—Just tell me if it works

Does the quick-and-dirty spacer fix work? For certain kinds of drift, sure. For a mostly non-invasive option, it helps a lot, and maybe with some deadzone calibration tossed in, you’re 99% of the way there. But there are two better fixes: the easy way and the long road.

Victorstk’s fix is a cool win, and we’re happy they’re spreading the word about both the issue and the DIY fix. But if you’re going to open your Joy-Con for a 40% reduction in drift, why not spend the two extra minutes (and yes, some money) to replace your joystick? It’s easier than you think—check out our team’s mid-pandemic attempts—and is a much safer, longer-term solution.

Yet the fact remains, that joystick will wear out too. All joysticks are consumables with a limited lifespan. Nintendo, Sony, and every other console maker expects you to shell out for their controllers rather than taking the fix into your own hands. The real solution is treating joysticks as the consumables they are, and making them easily replaceable—batteries too! And that’s where the right to repair comes in. Who’d have thought video gamers, farmers, and car guys would have so much in common? The Right to Repair can help your gaming hardware last longer, work better, and reduce waste. What are you waiting for? Let’s unlock elite game console repair—fight for it! 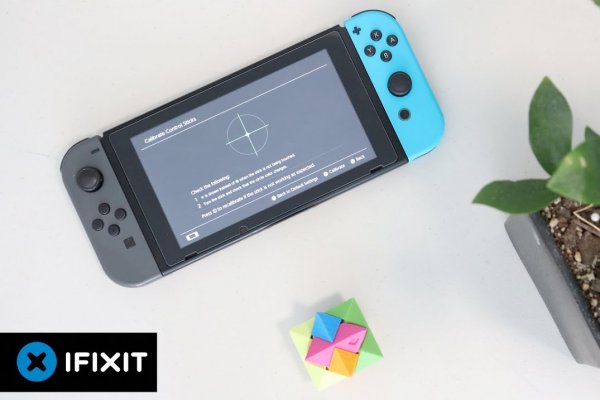 5 Ways to Fix Drift Without Opening Your Joy-Con! 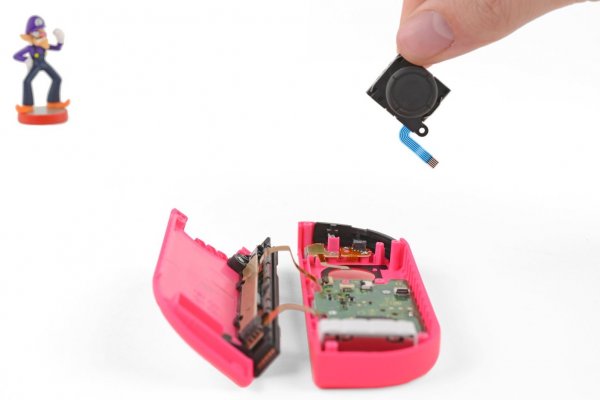 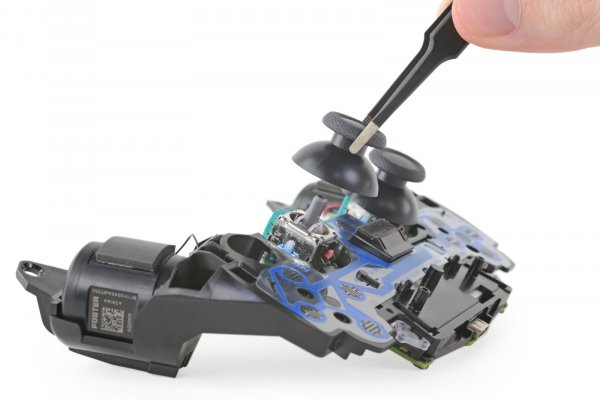 I tried opening my stick module but the metal tabs instantly broke off. I don’t know how Vk was able to bend them without breaking them off. They had no malleability whatsoever to them. My first idea was to clean it and sort the contacts but after that just ordered some replacements and was done with it all.

He did not, in fact, manage to open his analog module without breaking the tabs off. He doesn’t mention it in the main video, but you can confirm this breakage for yourself by watching his disassembly tutorial which make this fact evident. It’s particularly frustrating, as this detail calls into question the basis of his explanation of the cause for drift because it isn’t representative of even his own use case.

Opening the module without breaking the tabs is possible, however. While the larger tab is very rigid and brittle, there is a degree of malleability to the two smaller tabs that can be leveraged so long as you don’t bend them too far back. Unseating the side clips and bending these two tabs sufficiently allows you to carefully remove the shield by using the larger tab as a pivot point. Of course, your range of movement is limited and excessive bending or careless attempts at removal may deform the base of the shield, which is something to be avoided and is just as problematic as breaking the tabs.

It is always a great idea to put paper in something that one of the most common issues is water damage. I can’t wait to get moldy joycons in for repair.

I have replaced the sticks many times they don't seem to last very long. Luckily they are easy to get for a couple bucks and not very hard to replace so I just ignore all of these quick fixes.

I would agree with legislation that would stop manufactures from actively blocking you from fixing stuff by not letting buy the parts but I don't think they should be forced to make things in a way that makes it easy for you to fix. That should happen through market forces.

The introductory paragraph is something I appreciate a great deal. The mention of there rarely being a singular solution is an open recognition of the multiple potential causes of the symptom that is drift -or any one of many potential problems that arise in these kinds of controllers, really.

There’s actually much more that can be explored and broken down where this alleged fix is concerned and I’d enjoy seeing that discussion happen. From the reason this method apparently works for some cases of drift to the potential consequences that come with its application on both the stick assembly and the surrounding components of the Joy-con as well, there are various matters on the table to consider.