In the simpler age of March 2019, Apple released 21.5-inch and 27-inch “spec bumped” iMacs, predictable component upgrades to its established line of desktop computers. We took them apart, but never published a teardown. The insides looked much like the insides of the 2017 models.

Today, however, we’re going to show you the insides of these very familiar iMacs. We’ll also give them a higher repairability score than we originally planned. That’s because, one year and a Congressional hearing later, we know that two PDF files we saw on Apple’s servers were not a mistake.

Allow us to explain.

It’s not a secret that Apple has its own repair guides for devices it sells. They’re available to Apple employees and certified technicians through the company’s private network tools. But Apple has not made its full repair manuals publicly available since, in our estimation, the Apple II. You can find other guides for your devices—user guides, quick start documents, “Essentials,” and more—but rarely will any of them tell you which screw to remove first, or where to start prying.

Repair manuals are important. iFixit exists in large part because founder Kyle Wiens could not find Apple’s repair manual for his iBook G3. Back then, Apple routinely sent takedown notices to anyone who attempted to circulate said manuals. Nowadays iFixit engineers, and anybody who wants to help, can do a lot with reverse engineering, general repair knowhow, and photographs to create their own original guides for fixing things.

But the people who built the device in the first place know the most about how it works. First-party repair guides also strongly hint toward repairable, sustainable devices. These are the people who will have to open these gadgets up when customers send them in for warranty claims; they will, hopefully, avoid making those procedures unnecessarily complicated.

Which brings us to two important files in Apple’s list of manuals for the iMac: repair guides for the 21.5-inch and 27-inch models from 2019. We spotted them soon after the devices’ release. Writer Whitson Gordon emailed Apple to ask: “Is this a mistake, or did you mean for this to be online?” Apple didn’t respond, but you can read about how it spurred an internal debate over not just one team’s decision to release them, but the company’s stance on open repair as a whole. That’s an ongoing story, but in the meantime, the repair manuals remain available. And their presence, at a minimum, adds a full point to these iMacs’ repairability scores.

It’s an easy point to add because these are not just readable, technically competent repair manuals. These manuals are actually kind of great. Using plain language, helpful visual indicators, and clear photos, they detail every step of the major repairs you’d expect to undertake on an iMac. It’s striking to see Apple itself list the steps to cut through all the adhesive, gently remove the screen, disconnect all the cables, and get to the iMac component you need to fix. It’s not like we’d assumed we were wrong with how we approached the job. But it’s weirdly validating, like hearing your math teacher admit that doing calculus by hand is tiring.

Apple’s approach to walking a newcomer through a repair is strikingly similar to our own. iFixit has an open guide to how we approach tech writing. We strive to use plain language, avoid unnecessary jargon, and be exceptionally clear. iFixit developed this approach to tech writing because most of the manuals we’ve seen are, in a word, bad. But Apple’s guides—for the 2019 iMac, and others we’ve seen—were written by someone who knew what they were doing.

There are definitely quirks in Apple’s repair guides, borne of Apple’s repair mindset. For instance, there is no guidance regarding heat sinks or CPU replacement, even though thermal paste and pads are included in Apple’s tools list (our guides offer this). Apple leverages its size and expertise to create nifty exploded diagrams and extensive parts lists, alongside the usual graphical cut-outs, zoom-ins, and directional arrows. At the same time, Apple uses the same markup style for highlighting every screw, even when the sizes are different—a strategy which, in our experience, greatly increases the risk of reassembly error. The differences are both intriguing and reaffirming to the value of having independent repair guides.

Regardless of our nitpicks, Apple gets credit (and the iMacs a point on our repairability scale) for making these manuals available, as would any manufacturer.

As for the iMacs themselves, the models that warranted this second look and semi-teardown, one year later? They differ from their predecessors in only subtle ways. The high-speed RAM is ensconced in a shiny new Faraday cage to reduce interference. The formerly modular Wi-Fi/Bluetooth card is now permanently affixed to the logic board. There are faster processors and bigger storage options. Two USB-C/Thunderbolt connectors can power additional displays and fling data even faster. A few numbers and names are different, but the insides are hard to distinguish from 2017 models—about what we expected.

But getting inside, getting everything disconnected, and putting it all back together is still a time-consuming, delicate procedure. Re-gluing a whole desktop computer, even an all-in-one model, is no fun for anyone. But in the iMac specifically, some adhesive strips can, if peeled off incorrectly, rip up a mylar coating that protects the display. iMacs are, as Linus Tech Tips put it, “not designed to be taken apart and put back together.”

But with publicly available repair manuals, however painful the actual procedures can be, this device offers a greater sense of long-term service potential. It’s a tricky thing, providing this recognition to Apple. The company puts a significant amount of effort into lobbying against Right to Repair bills that would, among other things, make all such internal manuals available to the public. And we know, by way of emails provided to Congress, that the release of the iMac repair manuals was an aberration. Since then, Apple has simultaneously produced its most repair-friendly device in many years, the Mac Pro, and chosen not to release any more manuals for its other devices.

Still, this tiny revelation feels like the first signs of spring after a long winter. Apple published service manuals and the world didn’t end. There are known internal debates about repairability, and a public pledge to aim for more repair options as part of their environmental agenda. We’re eager to see what crops up next. 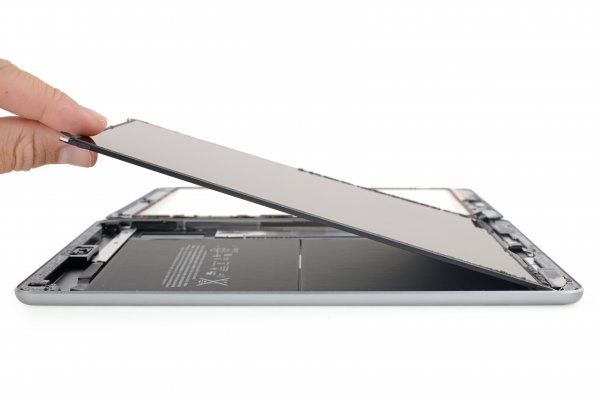 The iPad 6 Fails Our Repairability Test

good on apple. sort of. they had to be kicked into doing it though

I always found doing calculus by hand was exhilarating. Kind of like fixing things by hand.

Downloaded both guides and the 2019 27” iMac, which my daughter has, is 115 pages long. It includes Apple part numbers for everything in this iMac along with tools and other assembly parts. This is something that is worth paying for and the fact Apple is giving it away for free is fantastic.

As for Linus Tech Tips comment about iMacs not being designed to be taken apart, that’s garbage. The hardest part is opening it up but once you’re in everything is easy to remove. As for replacing somethings that are soldered in, tough, I’d rather have things properly installed and tested instead of worrying about a bunch of sockets.