That means that Nikon’s roughly 15 remaining Authorized Repair Station members are about to become non-authorized repair shops. Since Nikon decided to stop selling genuine parts to non-authorized shops back in 2012, it’s unlikely those stores will continue to have access to the specialty components, tools, software, manuals, and model training Nikon previously provided. But Nikon hasn’t clarified this, so repair shops have been left in the dark.

“This is very big, and we have no idea what’s coming next,” said one manager at a Nikon-authorized repair shop. “We need more information before March 31. We can make contingency plans, start stocking up on stuff, but when will we know for sure?”

In a letter obtained by iFixit, Nikon USA told its roughly 15 remaining Authorized Repair Station members in early November that it would not renew their agreements after March 31, 2020. The letter notes that “The climate in which we do business has evolved, and Nikon Inc. must do the same.” And so, Nikon writes, it must “change the manner in which we make product service available to our end user customers.”

In other words: Nikon’s camera business, slowly bled by smartphones, is going to adopt a repair model that’s even more restrictive than that of Apple or other smartphone makers. If your camera breaks, and you want it fixed with official parts or under warranty, you’ll now have to mail it to one of two ends of the country. This is more than a little inconvenient, especially for professional photographers.

In a statement, Nikon confirmed the termination of Authorized Repair Stations contracts after March 2020. Authorized service, Nikon stated, will be provided at its Melville, NY and Los Angeles, Calif. facilities. “We remain committed to providing the best product support and repair services to our customers,” Nikon stated. Nikon did not answer our questions about the former authorized shops’ access to parts or other official services.

None of a half-dozen authorized shops we spoke with—most of whom asked not to be named, so as not to face reprisal—had heard further from Nikon after receiving their letters. While most of their repair work is out-of-warranty, most said that the loss of official Nikon parts would seriously damage their appeal to customers, who depend on their location and rapid turnaround.

Nikon stopped selling parts to independent repair shops in 2012. Cameras, it stated in a letter announcing the policy, had become “more complex”, and required “specialized tools.” The move generated controversy; Nikon responded by noting it had 20 authorized repair centers at the time and, in typical large-manufacturer style, casting doubt on the competency and quality of independent repair.

The camera giant’s latest move comes as its fortunes are flagging. Nikon expects to lose $92 million on its imaging and camera business for the year ending March 31, 2020. The camera business has “deteriorated further as market shrinkage accelerates and competition intensifies,” Nikon told investors. In Japan, Nikon recently fell behind Sony to rank third in camera sales, with Canon at the top.

Authorized repair shops we spoke with, and many photography news and blog sites, cite Nikon’s late arrival to the mirrorless camera market as a particular pain point for the company, in addition to the general loss of the low and mid-grade camera business to smartphones. Most said they saw it as a bad sign that they had seen part and repair costs rise at a more rapid rate in recent years.

One shop, at least, isn’t concerned. Clayton Chastain, manager at Nikon-authorized shop Camera Service Company in Smyrna, Ga., believes Nikon will likely cut off training on new models, regardless of other moves. Even if Nikon stops selling parts, “We should be fine,” he said. Most of his firm’s business is out-of-warranty repairs, and he noted that they have a good stock of parts for the time being. He anticipates a resurgence in film camera work will likely supplement any lost Nikon-authorized work.

The other businesses that we spoke with said that the loss of official parts, along with a discount on repairs that must be mailed to Nikon, would deeply cut into their business. An authorized repair shop manager said that “99 percent” of the parts he needs can be obtained within a day or two from Nikon. Without those parts—and the crucial discount on mail-in repairs to Nikon for his customers—his value proposition for customers is frozen out.

“My options now are China, used parts from eBay, and whatever I can salvage,” the manager said. But the eBay market will soon become tight if Nikon stops selling parts, he said. “If I have to tell a customer it’s a couple weeks just to get the part, and I can’t offer a discount on the repair … I don’t know why they wouldn’t go to Nikon directly.”

In addition to parts, tools, manuals, and training on the latest models at Nikon’s facilities, repair shops will likely lose access to Nikon’s proprietary calibration software. Such software is used to verify and adjust the focus mechanisms and sensors on cameras. More than one authorized shop owner said this software is provided on an encrypted hard drive by Nikon, and the apps regularly check in with Nikon over the web to validate the owner’s authorized status.

Every shop owner we spoke with mentioned that Canon, while no longer offering warranty repairs through authorized shops, still sells parts at a competitive price to repair shops in good standing. That’s the best scenario they can hope for from Nikon, though nobody knows what will actually happen after March.

Nikon’s latest move is an example of the kind of repair restrictions targeted by Right to Repair legislation. Rather than demand that customers ship their cameras to one of only two places in the U.S. with official parts and tools, Right to Repair laws would provide repair shops and individuals access to the same equipment as used by Nikon’s facilities.

Incidentally, iFixit’s teardown and repair guide photography is run on Nikon DSLRs. We use D800s for guide and teardown still photos and D850s for video. Our teardown team has sent out our own cameras for repairs including sensor cleaning and USB port replacement. Even living less than four hours away from Nikon’s facility, some repairs leave us without cameras for two weeks or more.

You can perform a number of repairs on Nikon cameras yourself: tripod thread plate replacement, top LCD glass, back LCD screen. We’d like to have more guides, written by us and others, but it’s hard to find parts.

Note: This post was updated to remove the name of a repair shop employee. 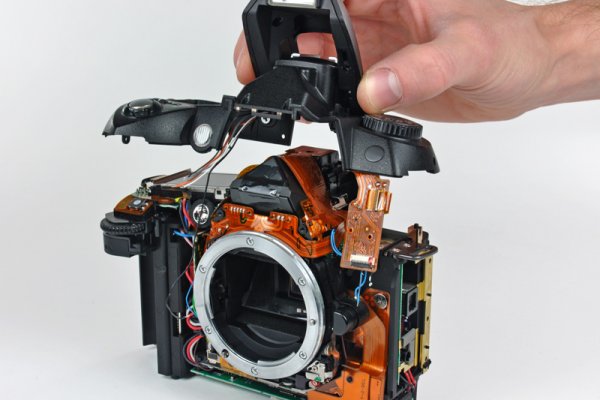 Not going to buy a Nikon again.

I think Nikon is still a good company. Even though they re changing there repair policy that doesn’t mean you shouldn’t buy a good high quality Nikon camera. Also that’s like saying that in iPhone user won’t buy anymore iPhones because they have to repair through apple for apple parts.

Wow, I used to work at the NY shop. When I saw this article, I was like, wtf, everyone there worked their @%^!* off 60 hours per week. Great to know that some of my old friends aren’t going to be out of a job.

I had film cameras repaired at that shop.