If you bought an iPhone 4 when it came out on June 24, 2010, you’ve had it for 21 months now. That’s just over the US national average cell phone turnover rate of 20.5 months. But maybe you’re not ready to upgrade. Maybe you realize that manufacturing is the biggest portion of a phone’s environmental impact. Maybe you don’t want to spend the money on a new phone. Maybe your phone does pretty much everything you need it to do—it’s just not quite working as well as it did two years ago. Here are a couple of simple, inexpensive repairs you can perform at home to get your iPhone back up to snuff. 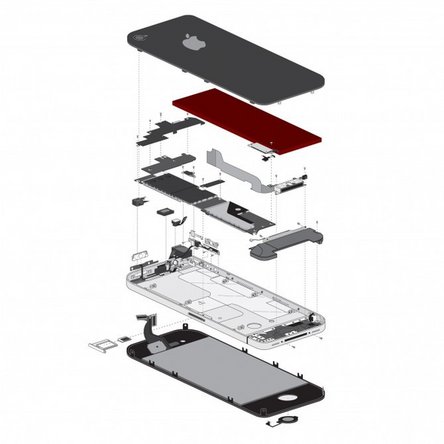 The iPhone 4 lithium-ion polymer battery is supposed to last 400 full charge cycles before it drops below 80% of full capacity. By the time you’ve had a phone 21 months, your battery is likely ready to be replaced. Apple says that the iPhone battery is not user-replaceable. It’s true that there’s no snap-off battery compartment, Apple doesn’t sell batteries, and when the iPhone 4 came out it was difficult to find a screwdriver that could remove the five-point rounded “Pentalobe” screws.

But changing an iPhone battery requires removing just three screws and one connector. And you can buy both the battery and the screwdriver from us for far less than the $79 Apple charges. We have both a guide (here) and a video (below) to walk you through it. Our goal is to empower people to fix their own stuff.

So how do you do it? After removing the two Pentalobe screws on the bottom of the phone, you slide up and lift off the back panel. Then you remove one more screw and pry up the battery connector, pull the battery away from the light adhesive, and put in your new battery. Easy-peasy. We hear every day from people who successfully change their iPhone batteries without having ever opened up any electronics before.

If your photos have started looking strangely fuzzy, take a closer look at your phone’s lens—it may be scratched. The plastic over the camera isn’t made of the same scratch-resistant stuff as the rest of the iPhone, and it can develop scratches while hanging around in your pocket or purse. By switching out the back panel, you can give your camera a new, scratch-free view of the world. Changing the back panel is even easier than changing the battery: you remove the two screws on the bottom of your phone, push up the back panel a couple of millimeters, pull it off, and presto. When you put it back together, you can use a regular old glass panel, of course, but we recommend a transparent panel—that way you can show off your phone’s beautiful insides!

Guide here, and video below.

Got something else you want to fix? We have many more guides for everything from toilets to the Nintendo Wii. Repairing is greener than replacing, so get out there and start fixing!