A few years ago, I learned an interesting lesson from an unexpected object. In the United States, Starbucks sells an espresso machine called ‘Barista.’ It is designed to perform the same function as a Starbucks’ human Barista, but without the need for meal breaks, a salary, and health care. One day, my friend Don came to me about his mechanical Barista. He loved it, and the little device had become an essential part of his morning ritual. But one sad and terrible day, instead of happily whistling and whooshing out espresso, Barista gave out a sad little hiss. Then a click, and then nothing.

It turns out, the theory that the mechanical Barista would not need health care was incorrect—Don’s Barista required an urgent medical intervention. For reasons that may have something to do with running an organization called iFixit, my friends think that I have a knack for whispering to machines. That’s not entirely true, as this story will make clear. But heedless of my actual talent for machine repair, Don brought Barista to me for an urgent medical examination.

I know nothing about fixing espresso machines! But I am a very enthusiastic person. And so, like any self-respecting member of digital society, I googled ‘how do you fix a barista.’ Aside from some snarky jokes about what people would like to do to their local human Baristas, I was surprised to find very little information. The Starbucks service manual (if it ever existed) was nowhere to be found. Undaunted, I pressed on, hoping to stumble across one of those amazing little corners of the internet where enthusiasts have poured amazing amounts of time and effort into documenting and sharing their obscure knowledge.

Alas, no closet Coffee Machine Doctor had taken the time to share their knowledge. Bummer. It turns out that Starbucks gadget repair was what I like to call an internet desert: The know-how to fix it existed somewhere in the world, but that information was not on the internet.

But I was undaunted! Without a clue as to the intricate methodology of proper coffee machine servicing, I dove in headfirst. What’s the worst that could happen? Barista was already broken. I quickly dispatched a few screws on the bottom of the case, and then I was in!

Inside, I found a jungle of wires and tubing and pumps. This was going to be harder than I thought! I pressed on with the disassembly, methodically photographing my efforts so that I’d be able to reassemble the gadget afterwards.

So while Don is figuring out how to keep their gizmos running, Starbucks has moved on. They don’t make replacement parts any more. And perhaps that’s okay. At some point, the manufacturer’s obligations end, as it’s not economically viable to support products forever. (Although Patagonia is certainly valiantly trying!)

Our things are just that—ours. Ownership is a powerful, empowering thing. I can understand the emotional bond of Aibo owners. If I tore the stitching on the quilt that my grandmother made me, I would go to the ends of the earth to repair it. Of course Aibo’s owner made sure she had a way to fix her pet!

So here I am, with Barista disassembled on my kitchen table. Try as I might, I have no idea how to diagnose the problem. It’s time to call it quits and use my photos to reassemble the machine. But all was not lost. Along the way, I had learned quite a bit about the mechanical assembly of this particular Barista.

In defeat, I decided that I would leave a signpost for the next traveler. In Boy Scouts, kids are taught to ‘Do a good turn daily’—the idea is to try to leave the world a little better than you found it. For me, sharing hard-earned know-how about repair is a way to do just that. So I posted photos of my journey inside the little espresso machine on the internet, along with some disassembly tips.

The aspiration of the ‘Cleanest Line’ is to leave no trace. When we’re out in the wilderness, we go out of our way to leave the environment pristine. But we can do better than that: If we find litter, we pack it out. We scatter fire rings and rehabilitate trails. Every excursion, we have a chance to make the world a little bit better, and the journey more pleasant for the next traveler.

I propose that we treat the landscape of information in the same way. For every thing that is broken, there is someone in the world who knows how to fix it. But that information is not evenly distributed. Taking the time to teach someone else what you know is a way of passing it along.

That’s why Patagonia and iFixit have partnered to make repair information available for keeping your gear in tip-top shape. We’ve put resources online for maintaining DWR, fixing fishing waders, and even some handy tutorials on how to sew and patch camping gear. 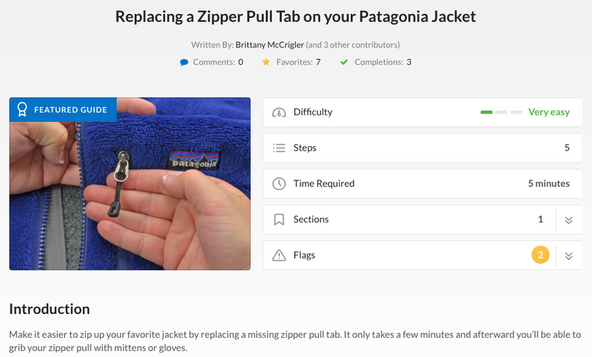 But that’s just the beginning—we don’t know how to fix everything, and we’d love to learn from you.

Just as we share tips for the best places and lines to climb, let’s share how to keep the things that we own and care about working.

This blog was originally published by Patagonia Japan on Patagonia’s blog, The Cleanest Line. The Cleanest Line promotes Patagonia’s mission by encouraging dialogue about the products they build, the sports they love, and the environmental issues they’re concerned about. View the original version of this blog in Japanese here. 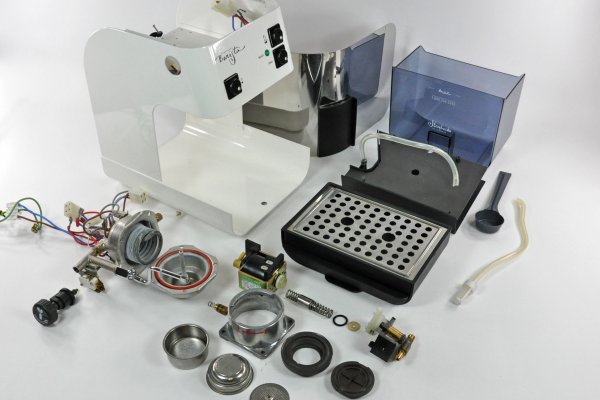 We Tear Apart a Barista!