Anyone with over 100 reputation can flag problematic comments and posts.

My Dell inspiron 15R display goes black after using for some time?

I'd bought a Dell's AMD version of inspiron 15r laptop about 3 years ago.

I have been experiencing a very annoying and frustrating problem since last few months.

While I was doing some work on it,

the screen went black all of a sudden.

It happened once few hours prior to then, and force rebooting had solved the problem at that time, so I calmed myself and did a force reboot.

But it didn't solve the problem this time.

I tried rebooting 3,4 times, but still no solution.

The screen was black even in the entire process of booting from the beginning.

I also found out that the screen wasn't totally black.

The screen had shown very mere display which was like 0.001% away from perfect dark black.I did as much research as I can for solution, but I couldn't get any good answer..

I couldn't solve it for several hours.

Several hours passed , and I tried booting it up again.

For few minutes, it seemed to be the same old black (or dark) screen.

But it automatically turned back to normal brightness again.

I haven't done anything to it.

Every now and then after working just fine for an hour or so, the screen goes black. The sound and all is clearly audible if a video or audio is playing but there is no display on the screen.

I'm wondering why this is happening..

Can anyone give me an answer to this?

Is it a problem of loosened cable connection to the screen or it is with motherboard or LCD Screen itself ???

Akshay ...and just in case a new LCD should not fix it, check the power circuit for the LCD backlight as well as pin 5 on your LVDS connector. 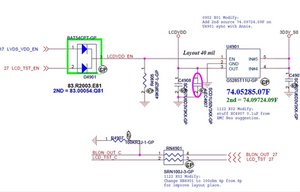