Written By: Robert Harvey (and 9 other contributors) 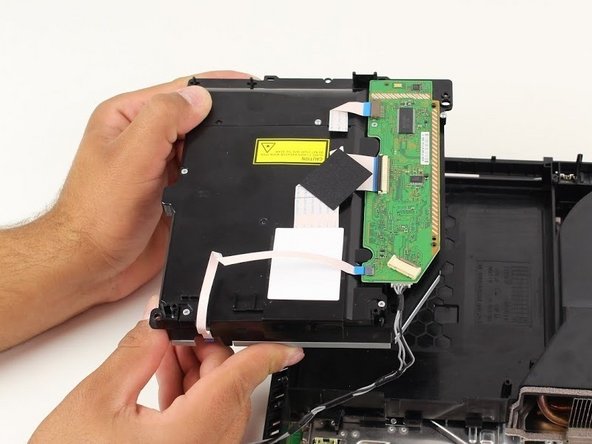 This guide has been the hard work of our awesome students and is found to be exceptionally cool by the iFixit staff.

131 other people completed this guide.

Z.Heng is helping us fix the world! Want to contribute?
Start translating ›

This was a great help after my 2 yr old put a coin in my PS4. However when following the steps backwards I got to step 7 which says 'Remove the 5 wire plug attached from the power supply to the motherboard' & couldn't see how to reattach it. I then noticed it looks like I've pulled the whole plastic white casing/plug holder (within the orange rectangle) off the mobo rather than just the plug from the casing. Although the pic looks like the plastic casing does come off the mobo as it's at an angle (maybe why I pulled the whole thing out or maybe I did it right).

I'm thinking I've made a mistake is because now I cant see anywhere that I can 'plug' the 5 L shaped wires on the bottom of the plastic casing back onto the mobo. Plus where they used to be attached there's now 5 tiny silver rectangles on the mobo (2 opposite 3), so I guess these 5 wires were some how adhered to those mobo rectangles by a conductive adhesive of some sort.

Any suggestion for the best repair method would be appreciated.

If you've pulled the female end from the motherboard the it need to be resoldered to the board, most likely gonna need to pull the motherboard. It's a very simple connector, sounds as if you yanked the whole thing off.

Is anyone there who try to change the optical drive without change the Motherboard in the same time ? And does it run ?

Thanks for your help.

How about a guide for replacing just the laser unit instead of the whole drive?

Would this fix the disc ejection issue?

No, as the issue isn't attributable to the drive itself. The issue is the capacitive eject button and the rubber foot on the bottom of the console. The foot expands with the heating and cooling cycles of the machine, and can set off the button just by making any contact at all. I suggest removing it, cutting off the front 1/8", then reinstalling it. That's what worked for me.

This is very useful, however in order to play a new Optical drive a married motherboard must be installed also. Since the these are not plug and play drives.

Thanks for your help.

Sounds like the connector fron the disk drive to the motherboard may not be fully connected.

I recently got a PS4 form a relative that was a busted disk drive because he spilled water on it. the repair man said that the drive controll board is dead bacause foo water damage. What do i do? buy a new whole dirve or will that not work because of MARRage

I wonder what I could damage. I used tutorial from yt.

Console works, games are running without problems, it is silent after new thermal paste.

But blue ray is dead: - not responding when pressing bottom eject button. - not reading already inside cd. - not accepting any cd - no option to eject from controler options

I wonder what could go wrong. Some cable? Something wrong with this small board that is next to blue ray?

I see small board, 1 4-pin connector, 4 tapes( 1 from motherboard, 3 from blue ray). Everything connected but not working.

Anyone has some clue how I can fix this or investigate?

I have the exact same problem, I cleaned my very dirty PS4, applied the arctic MX-2 thermal compound, put everything back together. When I fired the PS4 back on the Blu-ray drive doesn't do anything., won't take any discs, the eject button does nothing.

Were you able to fix yours? How did you do it? what was the problem? If not.... can anyone help us both?

my Blue ray drive is dead

When you remove the blu ray drive one of the most important steps to replacing it (and one that most instructions fail to mention) is the two metal tabs on the drive that hang over the back and left side. Starting withe the rear of the drive make sure the silver tab that hangs off the back slips over the plastic ridge and do the same with the other silver tab on the left side. The first time i tried to clean my optical drive i just popped it in without making sure these two tabs were in the proper position and it was as if there was no power being supplied to the drive.

Hi! My son put a coin in the optical drive, how can I put the coin out doing this? sorry for my english im from spain, i need help

this s the same problem i am having can somebody help us. it would be muchly appreciated tnx

Changed my ps4 blue ray disc drive with mother board cause my son put multiple games in. Ordered and installed new one but now it will not recognize cd or game when inserted. Do i have to sync new disc drive to ps4 or does it automatically do it? Please help

I installed new optical disc drive and now my ps4 will not recognize any disc or game. Wat to do?

Okay, why is the system automatically flagging my reply to someone as spam?

I had this problem where I didn't press the release tab on the mother border and the flex ribbons ends got cut off . could this be the reason why my drive doesn't even accepttdisks anymore ?

I went step by step replaced the drive and now there is no power. It was working fine when I took it apart now nothing... I've gone back over it 3 times... Power supply's just don't die like that do they?

I'm in this same boat. Bought two optical drives, and when installed the Playstation 4 won't turn on, with the old one it turns on but the disc sensor doesn't work and won't receive discs...

Did you solve your problem?

I TOOK APART MY PS4 TO REPLACE MY FAN, WHICH WAS SUCCESSFUL. BUT THEN ALL THE SUDDEN MY DRIVE WILL NOT WORK. IT JUST GIVES KE AN ERROR MESSAGE. WENT BACK THROUGH AND MADE SURE EVERYTHING WAS CONNECTED PROPERLY AND IT IS. I FEAR SOMEHOW THE DAUGHTERBOARD GOT MESSD UP. I NEED TO SPEAK WITH SOMEONE FAMILIAR WITH THE ISSUE AND IM WILLING TO COMPENSATE SOMOEN WHO CAN POINT ME IN THE RIGHT DIRECTION.

I have a problem! i bought a bdp-020 wich is the one that was inside my console! but when i try to play something i got this error "CE-35888-2" and when i tried to update i got this one "e-ffffffff " help me please.

Yeah that's what I need to know does anyone have the answer?

So quick question. By married motherboard do you mean the board that is on the optical drive itself or are you referring to the whole system board of the PS4? If I bought a new disc drive online and swapped out the disc drive motherboards would that work? Any soldering required, or simply remove some screws? Thank you for your help, just need a quick answer!

My PS4 is doing the thing where it's constantly trying to eject a disk that isn't in there. It had been doing this for a long time so I tightened the manual "eject" screw, turned it on it's side, removed the rubber foot, unplugged it from the way and let it sit for 10 mins, etc (pretty much everything on the interwebs) this worked for a a few months but it's back to it's old habits. Am I able to just removed the optical drive? All my games are digital copies anywho and having the optical drive has just been annoying (it's now at the point where it ejects every 30 seconds) due to the ejection noises and the beeping.

Yeah I'm with you. I've tried all that and more. Turning the manual eject screw seemed a temporary fix but even that doesn't work now. Still beeps and ejects. That's why i'm here. Will it help to replace the drive entirely or not? Seems not. I'm mostly digital but I still do have a need for the optical drive.

So the motherboard that is on the old blue ray disk drive do you need to put that on the new one or do I have to buy another one?

I bought the new bluray drive, switched over the mother board, and now I can't insert a disc. It's almost as though there's no power to the drive.

Could anyone help me.

I tried to change the drive board and somehow broke the big ribbon cable.

I removed my old disc drive because it wouldn't accept discs at all. It wouldn't even make a noise....almost like it was just DEAD. So I bought a brand new blu Ray optical drive for the PS4 and I removed the old one and installed the new one. I removed the motherboard from the old and screwed it onto the new one. I am sure I've installed everything like it should be but when I go to insert a disk.... I GET THE EXACT SAME RESULT!!!! No noise and it won't accept the disc. Please help if anyone can think of something I might have forgotten to do or overlooked.

If you bought a married drive and mother board, would they then run together?

You guys are using a total different kinda of PS4 I have .. My blu ray isn’t married to my motherboard .. And now I dont know how to fix this error ..

So how do I marry a new disc drive with the original blue ray logic board??? Naturally to replace a functioning logic board when only the old warn out drive itself seems like a waste of $160.

have a ps4 cannot get a part which is the disk detection sensor kld-003 can get kld-002 and kld-001 but cannot find find kld-003 anyone with the same problem.

I recently took apart my ps4 to replace the thermal paste and since putting it back together the drive will not eject via the button on the ps4 and will not accept a disc.

I can eject the disc via the on screen menu so there is power and I can also hear the drive churning away when I turn the unit on.

After I completed all the directions in reverse. For the drive to actually read a disc, I had to do an update. Now the eject button doesn't work. No clue what is wrong or how to fix it.

Not sure if this is still updated, but I installed the new disk drive made sure all the cables are connected correctly and made sure it was the right type of drive, but now when i try and insert a disk it doesnt even seem to drag it in. Any help would be appreciated

Hi, did you change the small board on the drive?

You have to use the old one from the broken drive, because its connected to the mainboard by some sort of software coding.

I have disc drive that doesn't want to read only a few disc, any solutions would be great.