Can you identify this component?

Hi, Can anyone help me?

I turned my Macbook Pro (Late 2006 A1150) on the other day, everthing was going well until i tilted the screen. It caused the worn-down backlight cables to short which then fried something on the Logic board. I opened the Mac up an luckily found the broken component, however, it is so damaged that i couldn't read the code on top of it.

The part im looking for is a tiny black box with 6 pins (3 on two opposite sides).

It is on the bottom side of the logic board, to the lower right of the prossecor. below the component reads "Q9450" 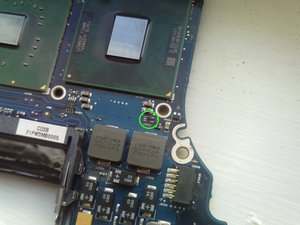 (btw i did google "Q9450" and found nothing but processors)

Can someone please identify this component so i can purchase a replcaement.

just could not resist to answer this old question. I thought it might come in handy for someone else that has similar issue. The part in question is FDG6332C20V N & P-Channel PowerTrench MOSFET

I'm afraid you will have to change the complete logic board.

I just fried my MBP's graphic card and this also could not be replaced separately - I had to have the complete logic board replaced.