See LEDs, what is the problem with this model not booting up

Thanks to this site, I finally found the diagnostic LEDs in this version of the isight. When this computer is plugged in, the LED 1 briefly lights up, then fades. Does that mean the power supply is supplying power? What would be the next step to help it boot up? I currently can't get it to power on. This computer had this problem before but the Apple tech was able to reboot it, I am hoping to replicate his success.

BTW, there is supposed to be a small black button to manually refresh the PMU on the logic board, but I wasn't able to find it.

blake, here is what Apple says "The SMU (System Management Unit) is a microcontroller chip on the logic board that controls all power functions for your computer. If your computer is experiencing any power issue, resetting the SMU may resolve it. The SMU controls several functions, including:

Telling the computer when to turn on, turn off, sleep, wake, idle, and so on.

Force Shut Down (press the power button for 10 seconds).

Resetting the SMU can resolve some computer issues such as not starting up, not displaying video, sleep issues, fan noise issues, and so on. If your computer still exhibits these types of issues even after you've restarted the computer, try resetting the SMU. To reset the SMU on one of these iMacs:

Turn off the computer by choosing Shut Down from the Apple menu, or by holding the power button until the computer turns off.

Unplug all cables from the computer, including the power cord.

Plug in the power cord while simultaneously pressing and holding the power button on the back of the computer.

Let go of the power button.

Press the power button once more to start up your iMac.

Image attached is from an original iMac G5, just to show where the switch is located for that model. Hope this helps, good luck. 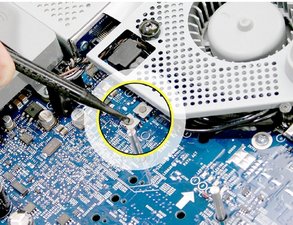 Turkey the 1.9 logic board changed and is identical to the next generation Intel board.

Yes Sir, you are absolutely right :-) Thanks.

This is not my logic board however, this is the "sensible one" in the G5 that isn't an iSight, does anyone know where the PMU-now-the-SMU would appear in the iSight board?

blake, you are absolutely right. Like I said in my comment that this is for the original G5.

Your LED indicates a failed power supply. I don't think there is a reset button (CUDA) switch on this model. The bad caps problem was pretty well gone by the time this machine was produced although I have seen one with a bad cap. I would start by replacing the power supply.

Here's how to replace it: iMac G5 17" Model A1144 Power Supply Replacement

I think when this comp was taken to a tech that the tech was able to press an internal reset button to make it live a bit longer, and I have heard some iSight owners say this button exists (it's supposed to be small and black), so it seems to me like it really ought to be there somewhere.

You're using an iMac G5 (Ambient Light Sensor) computer, your SMU was already reset when you unplugged and replugged the computer. You won't see an SMU reset button to press. See 11. here: http://support.apple.com/kb/TS2094?viewl...

I think it was these iMac's that had the notorious issue with failing caps/PSU's. Look at those first and make sure that none of them are bulging or leaking.

This won't seem to let me "add comment" to the right response, but oldturkey, it is actually the PMU button I'm looking for ("Power Management Unit"), there is supposed to be a PMU reset button inside this model but it will be hidden, because the isights are designed to discourage non-apple techs from finding things. They literally put electrical tape over the diagnostic LEDs in this model!