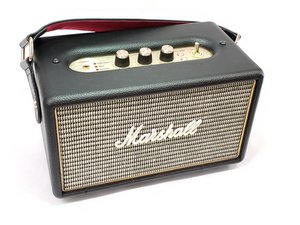 The Marshall Kilburn Bluetooth speaker is a compact, portable stereo speaker. This speaker comes with a built in Class D amplifier with quality sound range for its size. Bluetooth connectivity also allows for quick connections to bluetooth capable devices.

I got used Marshall Kilburn 2 ,after few months decided to change badbattery.

Looked around and noticed that one cable,don't know how to describe,on the top is thin as a piece of paper unplugged from some likeconbector.

It's made like that when you lifting up back panel it's easy to unplugged it.

After half an hour tried to turn on speaker - nothing,small red light bulb next to power on/wolume button not reacting also.Other side showed charging.

Then I decided to that "cable" stick just other "face" of that thin end in as socket.

I don't see any fuse etc. inside.

Maybe now that socket is little bit wifened or that thin top of that cable is damaged,since i puit in and out few times.

Anyway I see that speaker before someonewas repairing something inside,cant be like that from factory.

Kilburn 1st gen. I have back home at my country and it's simple to change battery.

This one they made more rouchy.

Anyone had simmilar problem with it?

Now I'll send it back home to my brother to fix it ,he is better with that or to take it to electronic repairs shop and to use it

Now I have to spend 200 pounds on new one and thinking to take the same or Acton without battery because it's gonna sooner or later needs it battery change. 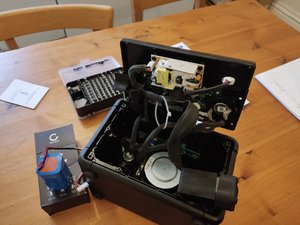