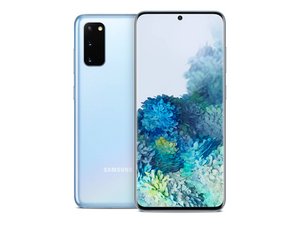 I can't figure out who has my phone network locked

I have a Samsung Galaxy S20 5g that now seems to be network locked. It was originally a Tmobile phone but I bought it from a private seller as an unlocked device. I was a straight talk customer and I got a bring your own device kit and set up my service on the phone. I used it for a year but I took out my sim card and I took the phone up to cricket wireless to see if the phone would work with their service since it is an unlocked phone but they told me no that the phone is network locked to the last service I had on the phone, which is straight talk. So I called straight talk and asked them for the code to unlock it but they said that they don't lock other carriers devices, only theirs so it must be locked to Tmobile (the originally carrier) so I went to Tmobile and they showed me on their computer that the device is not locked to them. So they said it must have been locked by straight talk. So I called straight talk back and they say they didn't lock the phone. So who locked it and how can I unlock it?

*Well I just found out that my phone has now been locked back to T-mobile somehow. Its not locked to straight talk.

Have you thought about checking with Samsung?

Carrier locks should always be implemented by the phone manufacturers in the end.