At the weekend I received a new (and apparently genuine) Apple branded battery for my MacBook Air 11 (early 2015). Fitted in quickly and it worked perfectly, showed full expected capacity and would charge and discharge no problem. I ran it through two charge cycles with no unexpected behaviour.

A couple of days later I turn it on in the morning (sitting attached to the MagSafe charger on power) to find no battery can be detected, at all. This includes within MacOS, CoconutBattery, and in Linux OSs I boot into. When I put my old battery in, it is detected and works fine.

I’ve tried (repeatedly) removing and re-seating the new battery, and also have reset the SMC and the PRAM. The weird thing is that (in Linux only) I can remove the power cable once the OS is running, and it will run ok for an extended time on the apparently undetectable battery.

I have a nasty feeling I damaged something in the Mac when I originally fitted the new battery - it’s possible I shorted something. But the fact that (i) the other battery behaves fine and (ii) the new battery worked perfectly for two days argues against this.

What do people think? Is it just the new battery that’s defective? Or have I damaged something on the motherboard?

=== Edited to add screenshots of Coconut 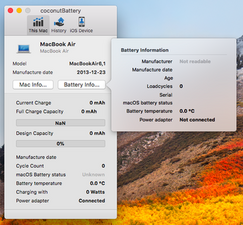 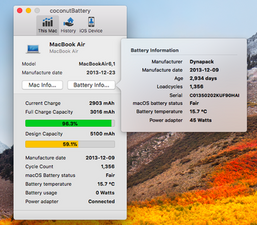 Sadly, this is a bad battery. You’ll need to get a replacement from the seller otherwise its $$ for a new one from a better source.

FYI - Anyone can have anything marked on the battery. Apple does not sell parts directly (at least not yet) nor via any one else. You got a knockoff battery, the seller will imply you got a real Apple part which you didn’t.

Thats not to say you got a workable battery as many of the factories which make batteries send quite a few out the back door either as seconds or from a good paying reseller like iFixit who buys very large volumes.

Righto, thanks Dan, this makes sense. I'm actually relieved in a way as I can get a refund for the battery pretty easily (if I'd damaged the main board that'd be a different story). Thanks again!