Replacing JUST the keyboard of the 16" MacBook Pro

With Apple switching back to the keyboard mechanism used in the 2015 Macbook Pro’s, I figured it might again be possible to replace the keyboard without replacing the entire top case. I have a Macbook Pro 16” with a defective arrow key, and sourced a new keyboard on Aliexpress for $30.

I took it apart, carefully removed the keyboard backlight (there’s a flex cable covering the ESC key area that needs to be disconnected first) and removed all visible screws - 20 or so. The rest of the keyboard is held in place with rivets, just like the 2015’s. I pulled out the old keyboard (using pliers), and then tried removing the left-over rivets. However.. That doesn’t appear to work: removing the rivets does not leave holes where you can then screw new screws in. Instead the rivets simply break off.

Thus I simply put the new keyboard in place, and used a dab of superglue on every rivet. To keep the keyboard pressed down I needed something heavy that wouldn’t cover too much of the keyboard, and settled on AA batteries - see the attached picture. I’ll assemble the Macbook again tomorrow when the glue is fully dry and report the results. 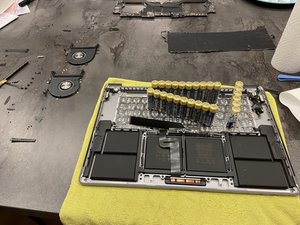 I put it back together today and it works perfectly. So this post is just for anybody on Google who wants to know if it’s doable to replace just the keyboard on the 16” Macbook Pro - yes it is.

Super Glue has its limits! Over time I'm sure some areas of your keyboard will feel spongy as the spots become loose.

You do know that this keyboard is covered under an Apple Replacement program:

@iphone3ghulp - You're right the 16" model is not. Even still I would have brought it in and have a good heart to heart talk with the genius and anyone else up the food chain to get it fixed under a warranty exception!

The older 2015 models could have the cup replaced which is the part that creates the short across the contacts. You might have been able to pop off the keycap and the scissor mech to gain access to it Type-J Silicone Dome I haven't attempted to fix the newer butterfly or magic keyboards after seeing how hard they are after tearing one apart.