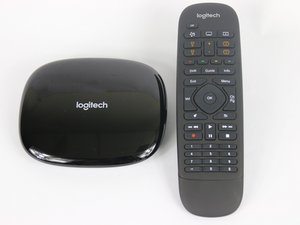 The Logitech Harmony Companion is a universal remote system that can control home devices. This version was released on October 12, 2015.

My harmony companion stopped working a few weeks ago. I replaced the battery. 2 days later it stopped working again. The battery was loose, however, I can’t put it back in. When I put it in, it spits it back out. I used the iFixit guide for opening the remote to access the motherboard/buttons, but I can’t figure out what to do about it spitting out the battery. Can anyone help with this? Harmony’s official response was “It sounds like it was dropped”. It’s very possible. I didn’t drop it, but I’m also not the only one to use it.

*Update….I forgot that I took a picture of what mine looked like before putting it together. The main wire that the battery sits on seems to be slightly off center. Would I need to bend it back? I wouldn’t think that would be the issue and I doubt it would bend like that from a drop (as Logitech suggested), but who knows. 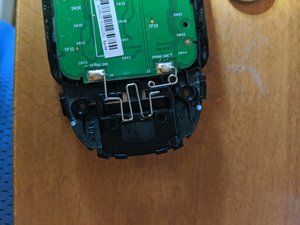 You may have to open the remote again and check how the battery is being held without the main cover on.

Make sure that the battery connection spring as shown in this image taken from the ifixit guide is holding the battery down properly etc. and is not bent out of shape.

Yes, I used that same picture to try and figure it out. The only thing off from the picture was where the "left side" (when looking at the picture) of the part that holds the battery, was not sitting in its slot. I fixed that but still have the same issue. It looked exactly like the picture when I put it back together, yet it still fly's out. I mean to the point where if I don't have my hand there, the battery will shoot across the room.

Your device seems to be missing the mechanism that is shown in the images of the motherboard teardown.

I think (and I may be totally wrong as I don't know the remote) is that the outside edge of the battery pushes the +ve spring forward making contact for the +ve side of the battery.

I think that this action of the spring moving also moves the latch holding the single U bend of the -ve spring allowing the spring to rise and contact the underside of the battery (-ve side).

When the battery is removed the +ve spring moves back and moves the mechanism that re-engages the latch on the -ve spring.

@jayeff yeah, it's tough for me to tell what is or isn't missing. The picture of the motherboard removal is very blurry. I would think if something had broken in mine a piece would have been rattling in the remote or come out when I opened it. I find it tough to tell. When I look inside, nothing looks like something broke off, but who knows? thanks for your input! I may have to move away from Logitech after 14 years. This remote was great, and my fifth harmony remote, but this issue makes me not want to buy another. I like physical buttons, so I don't like the LCD ones and the 650 is the worst I have had of the 5. Fortunately , I can use the app on my phone for now.

My Harmony companion remote has always had a problem with the battery popping out. I worked around the problem by folding up a bit of scrap paper and shoving it in with the battery when closing the battery compartment. Not ideal, but functional.

Thank you Andrew! This worked like a charm. Just ashamed I didn't think of it on my own. ;)

This! Mine worked great until I replaced the battery, with Duracell. I tried the paper shim idea, which sort of worked. But then I read Kevin's reply. Ran out and bought both a generic from the Dollar Tree (now $1.25, but whatever) and an Eveready. Both fit & work just fine, with the Eveready being a slightly better fit. Sure wish I'd read this before I deleted/re-registered my Hub, which was (and still is) a major undertaking.

I got it working after updating the hub in the harmony app, and then just putting it halfway in and then pushing it in with the cover.

seems likely to be unreliable.

and yes, the plus sign on the battery is up/visible when inserted.

Mine is ejecting the battery as well. Crap design. Glad I came across this website b/c I followed Andrew Witney’s advice about shoving a piece of scrap paper in there with the battery and that seems to work.

I had this too! It drove me nuts. Then one day when i replacing the battery for the umpteenth time it dawned on me - did I have the wrong size battery? I had been using a CR2032. But when I went to battery bin to find another all I could find was a CR2025. Wouldn't you know? It fits like a glove! No more battery issues at all!