CDMA version of the fourth generation iPhone. Repair is straightforward, but the front glass and LCD must be replaced as a unit. 16 or 32 GB / Model A1349 / CDMA compatibility.

Is it worth opening a dead, wet iPhone 4?

My CDMA iPhone 4 went into the lake this weekend. I put it in a bag of rice for three days, then called Apple. We attempted a reset power-up holding both the power and home buttons for 15 seconds. Nothing. Then I charged it (AC) for 2 hours and tried again. Still nothing.

My out-of-warranty cost for service or replacement will be $199 according to Apple. Having repaired many computers - PowerBooks, etc - I'm not afraid to open the thing up, but is there any possibility that I'll be able to find or fix anything?

Also, if Apple realizes that I've been inside my phone will they still replace it for $199? Thanks.

I have come across a few iPhones that have had liquid damage with both indicators have been set off but yet the phone still works fine. Opening your iPhone consists of taking the back cover off first. Apple has not placed any counter measures to ensure people do not take the back cover off so they won't know any different. They have however placed a liquid indicator smack bang on the side in the middle of the logic board on top of a screw which is needs to be unscrewed in order to to take the logic board out. There is a way to get around this by using a nail file to carefully peel it off but before you get into that you need to visually look at a few things. 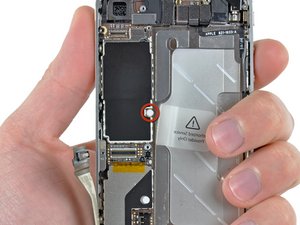 If there is rust on the screws it generally means that a small area around that has been effected as well. If there is a lot of rust then you will have very little chance of getting it working again.

2. How pink is the liquid indicator? If it is almost red then things aren't looking good. If it is only slightly pink then your logic board will have suffered minimal liquid damage and it could just be as easy as replacing the digitiser (screen) because it has been damaged.

Basically there is no DEFINITE way to know until a qualified iPhone repairman has had a look and has run diagnostics. If it was me this is what i would do. Keep in mind i do have every iPhone part at my disposal.

1. Does the iPhone turn on?

2. Connect to itunes, is it recognised?

3. Look at the Liquid indicators/signs of rust.

4. Replace the battery, does the iPhone turn on?

If any of the above have worked i will then start testing different areas of the phone.

5. look for damaged connections (LCD/Digitiser/vibrator etc.) if none then continue to step 6.

6. Disconnect the Digitiser/LCD and test with a new one

If none of the steps above have worked then i class the iPhone as unrepairable as i do not do logic board swaps.

By having liquid damage on your iPhone you have already voided the warranty so apple won't care if you do mess with it, but if there is a chance of getting it repaired legitimately while keeping your warranty then that would be my preference!

Thanks, Martin. I didn't get any response to this thread for 2 or 3 days, so I just bit the bullet and sent it in. For what it's worth, I believe I will have what would have been the remaining warranty on my original phone - about 10 months.

Also, for what it's worth, Apple tried to talk me into upgrading to "express replacement service" where they would send out a phone before receiving mine. Said I'd have it in 2-3 business days rather than 7-10 business days for standard service. I declined and took my phone to the UPS Store that same day (Wednesday) and they packaged it up using the Apple repair number I gave them. Friday morning at 10:00 I had a new iPhone.