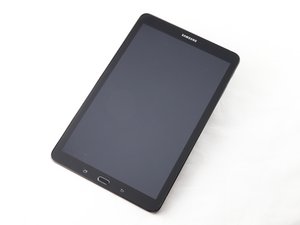 The Samsung Galaxy Tablet E 9.6 was announced June, 2015 and released on July 2015. When repairing this device, a few basic tools available from ifixit.com will be necessary. Samsung Galaxy Tab E 9.6 is available as 8GB or 16 GB versions, expandable by micro SD. It was sold in two colors: Pearl White and Metallic Black.

What causes the charging failure?

What are other possibilities why my tablet won't charge?

There used to be a lightning bolt that appeared when I put the charger on but won't charge.

Battery replaced. it Worked for a week and then died.

I thought I bought a bad battery so I got another.

Battery replaced and this time it only worked for 2 days. It stop charging after that.

Brought it to a repair shop. Technician’s finding was neither the battery or charging port is the cause of charging failure. He stated that it was something else.

The tablet will work on a full battery, it just won't charge. There are no signs that a charger is connected but According to the technician who looked at my tablet, it isn't the port and it isn't the battery that is causing the problem but “something else".

A volt meter would be a great thing to have on this one. We can tell if a device is receiving power when we use on connected to a charging cable. To me it sounds like it has to be something with either the charge port itself or there may be a faulty chip on the logic board. Apple uses a charge IC chip that can sometimes go bad. Not sure if there is something similar here. One simple troubleshooting step you can take if you have not done so is to try another charging cable and brick. I’m not sure how the technician came to their conclusion but it’s possible they just didn’t want to deal with it and just told you they didn’t know what was going on. Not sure how they can rule out the charge port itself if they can’t get it to charge.