iPhone 7 Power button not working, all other buttons work fine.

I have a iPhone 7 which I want to get out for sales but currently the power button isn’t working. I have replaced the side button flex cable twice now and still having the same problem (Yes i made the whole effort to simply swap them out completely without testing because i thought they would work for sure. stupid, but that’s what i did.) So now i actually decided to just plug another new flex cable in and use a small tool to press the button to see if the phone starts, and it does not start.

I dont think 3 of my flex cables would have the exact same problem including the 4th one that was already in the phone when i got it.

So to my question, is there anything else that can cause this problem? is the PCB broken somewhere? the phone boots perfectly fine when i plug a charger in and everything except the power button is working fine. I also feel like it’s weird that the other side buttons work but the power button is the only exception.

Note: I have updated the phone to the most recent IOS update and made a factory reset. didn’t really thought it would make a difference but still gave it a shot with of course no success.

This is the circuit for the power button. Normally, when you press the physical button, it shorts this input to ground.

You can see where it goes to the connector in this snippet.

You’ll want to verify is those components are still present on the logic board, or see if the connector is damaged. You can also try shorting the BUTTON_POWER_KEY line to ground with some sharp tweezers as that would simulate a button push. 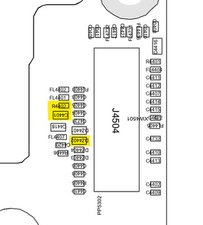