Why is my MacBook screen display colours so distorted

My screen colours went funny while watching a YouTube video. I initially restarted the device to resolve it but now its seems to be permanent. I've reset SMC as well as NVRAM/PRAM

I've connected it to a external display monitor and the issue doesn't appear on it. It must be the internal display or its cable. 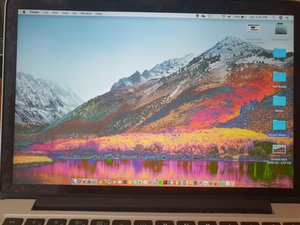 As you can see the Mojave background is red and all wacky. Images of people look distorted and the screen looks foggy (not really visible in image)

The display will need to be replaced the logic within it has failed.

No need to replace the display, check the UI elements, all primary colors are there, the screen is fine.

@tomchai - Yes the solid colored objects have the correct colors, only the textures areas are messed up. Don't forget the external display is showing the correct image.

I'm thinking the switching logic within the display has a failure (bad capacitor?) Don't forget this series uses DP signaling between the logic board to the display (iDP)

The color shades on icons is perfectly fine, so the screen is working exactly as it should. I believe this has something to do with rendering and composing images on lower layers, or GPU driver/config/hardware defect.

In any case, the DP line between the GPU and the display is working absolutely perfectly, otherwise the UI elements will also glitch up.

@tomchai - The external image is OK so its something in the internal display logic thats has the issue.

I still suspect this is due to software configuration, look at the hard drive icon on the top right, the greyscale is perfect. Due to the complex hardware and software architecture used in modern OS multi-display support, software issue CAN result in weird rendering artifacts only seen on one display.

I would suggest booting off an external drive or reinstalling the OS before trying anything from the hardware side.

Same MBP Retina, very similar problem here for almost 2 weeks. The way the colours are distorted is not quite the same, but it may be well just a different representation of the same issue (I will try to post an image when I get home).

In my case, everything started while normally using the laptop: just checking some websites with Chrome and switching back and forth to an IPTV stream on VLC. Suddenly, everything looks a bit ¿saturated?, then it went back to normal; after a few minutes, the same problem again which continued intermittently, more frequent every time, until it finally became permanent.

Restarting, resetting the NVRAM and the SMC didn’t solve it. I just switched the laptop off and next day it looked the same, BUT… after a few minutes the screen recovered the original, normal colours. That last just for a few minutes, but it was there… only that it wasn’t for long. That behaviour continued; I also detected that, when the colours were distorted that way, the screen presented very clear image retention.

Last Friday I hooked up the laptop to an external 24” monitor, where the image is shown just fine. I left the MBP display as the secondary one, and it happens that… for 2 hours the desktop’s background image was fine, then it went distorted again. I created a white *.jpg with the same resolution than the screen, and opened it to full screen; when I do that, the display always fixes itself for a variable period of time.

I have an appointment today with a Genius, but guess what… I have been using the MBP for 3 hours now and the display is fine. I would like to show him how the thing looks when distorted.

If you find anything please keep us posted, I will do the same.

PD. Finally I cancelled my Genius appointment given that I couldn’t reproduce the problem today. And this is my screen: 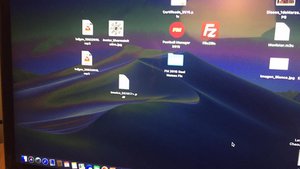 @ksillas & @imkaran - The humidity in the air can be a factor here. Corrosion is like a sponge, it's only causes issues when it has water does it become conductive.

What you do to keep your screen clean is a big factor! Using a spray directly on the screen is a big No No! Instead spray the cloth you are using to wipe the screen! This removes the risk of the cleaner from dripping down into the displays logic which is not protected!

What should I do now to solve this...