It often reports paper jams in tray 1 but there is no jam. To reset it all you have to do is open tray 1 and close it again.

We have an identical machine here with zero symptoms. I swapped trays but the issue is not in the tray but with a roller on the device itself.

Apparently the way these work is the roller is turned for just a moment, enough to pull the paper from above and feed it to the next rollers in line. When not turning under its own power it spins freely. In my case, the roller is oftentimes not being turned under its own power at all or very weakly when attempting to feed paper. I discovered this because there’s a black bar that hangs down and when it’s pushed up even for an instant it believes the paper tray is in there. That is making troubleshooting a LOT easier.

The roller is on a shaft that runs left to right across the machine. The shaft is half the width of the machine and attaches to the device from the left. There is a normal amount of lateral play in both devices but on the problem device if I push the roller shaft to the left (into the machine) it turns on its own with full force. If I pull it to the right, it does not turn on its own at all. That’s not to say that it doesn’t spin freely, because it does; it does not turn under its own power.

If I replicate this test on the functional device it turns under its own power no matter which way I apply pressure to the shaft. This leads me to believe that a gear is loose or has been partially stripped. 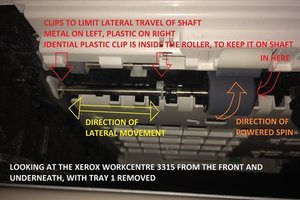 All that being said, both of these devices are heavily used as fax machines and down time should be kept to a bare minimum. Does anyone know how the internals work or have a service manual for this?

EDIT: here are the pictures of the side mostly popped off. There were no screws for the side panel, just clips. 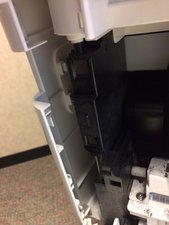 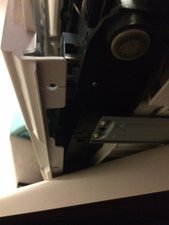 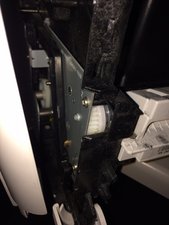 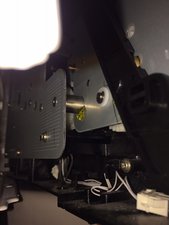 - this one shows the shaft end with white retaining clip. Behind this metal plate is the drive shaft clutch which the tech said is failing 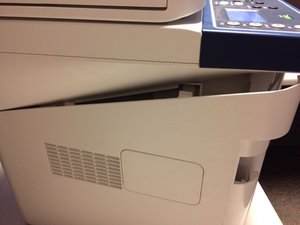 I was able to take the side of the device off without shutting it down, allowing faxes to continue coming in. As long as I leave the front cover up it even prints.

I'll post pictures of it later. I got to where I could see the shaft coming through a plate with a retainer clip on it. If I can remove that plate I can see what's going on with the gearing right behind it. However, I discovered that the printer is under a service contract so I probably won't do any of that and it will be all fixed tomorrow.