Released on March 3rd, 2017, the Nintendo Switch is a handheld that can be played on the TV or on the go.

Switch had a damaged USB-C port with broken pins. Replaced the USB-C port with a new one and now it charges fine and everything works great except for the Nintendo docking station to output to HDTV.

When I connect the Switch to the dock, it does receive a charge through it and the green light to indicate it’s outputting to an HDTV lights up, but no image or sound is produced on the TV.

I have already gone through Nintendo’s official troubleshooting steps with basic things like trying other TV’s, other HDMI cables, etc. I have tried different combinations of the order in which I plug the cables into the dock before I actually connect the Switch and none of that has made any difference. In fact, according to Nintendo, if I am getting the green light on the dock but there is still no image displayed on the TV, then I should send it in for repair. Heh.

So rather than drop close to $90 for an official Nintendo dock or $40 for a third-party dock, does anyone have any other suggestions? Is there any way to go about troubleshooting the controller board inside the docking station? Could the USB-C port I used to fix the no charging issue due to the damaged pins be to blame? Could the damage to the original USB-C port have caused other damage to diodes, resistors, ICs?

To anyone else facing this issue - Go back and check your soldering job on the USB-C port. The lower row of pins on the port was to blame. One or more of them may not have been soldered properly. 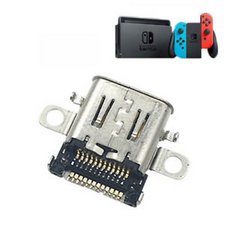