Okay so first of all I never had any issues with the MacBook at all!

I put Windows on the system because everything I wanted to do could not be done with a mac OS-10. So then, I wanted to switch back to Mac OS-10 which I did.

I tried a SMC Reset and nothing, still I got it working again and again it was only for 5 minutes and I haven't been able to get it back working again

I don't think it’s the logic board, charger, or battery seeing that it was working on and off. When I hold the power button and remove the battery and keep holding for 10 seconds then putting the battery back in the system it then comes on without having to be plugged in but the fan is on and still no battery detection.

I think its something that's not installed or something from me switching the OS so many times.

When its connected to power cable the light on the MacBook blinks 5 times before it comes on.

I've tried everything, like I said it’s not the battery or power cable or the logic board (I think) because it was working twice for 5 minutes...

Its very annoying and sorry this post is a mess its 2 o'clock and I've been up all day working on this thing and nothing.

With the Power Cable Connected 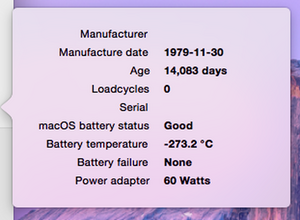 Without the Power Cable Connected 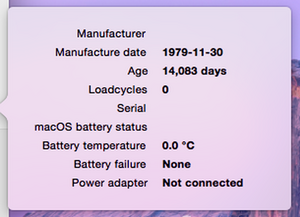 Let double check a few things. Install this gem of an App: CoconutBattery Mark your batteries so you know which is which (A, B, C...) Now with the A battery installed take a screen snapshot of the main window so we can see what CoconutBattery is telling us about your system & battery. You'll want to two two tests one with the battery alone and the other when the charger is plugged in and paste them here for us to see. If you want to you can also do the other batteries as well just make sure you keep track which is which when you paste them here. Adding images to an existing question

Dan there you go I posted pictures of what CoconutBattery says

I'm trying to download a lower verison of mac os x to try the battery updater seeing it says i need leopard 10.5.6 or tiger 10.4.11 and its on the usb and when i start up holding option it dosen't show the usb any reason why?

What macOS version are you CURRENTLY on?

You might what to wipe the drive and reinstall from a usb if this continues to happen.

Yosemite and I've Just wiped the drive unless I didn't fully wipe it I have no clue... I used disk unity and erased the drives..

Can you do startup diagnostics? Hold "d" key during startup

I will try that now

Just let me know what it says

its just a white screen then loads normal nothing else

Snow Leopard 10.6.8 is as high as you can run without issues.

As far as prepping your USB so it works you’ll need to reformat it to GUID and Journaled file system. As you need to be able to boot from it as you’ll need to install Snow Leopard on your installer drive first then copy over the installer to it. That way you can boot up your system using the USB installer drive and run the installer. Newer releases make this a bit easier as now you can run it off of the mini OS that the installer has within it. Here is the link to the OS: Apple - Snow Leopard ($$) If you still have your grey OS install CD’s then you can install that release of OS-X and then upgrade from the Apple download site: Apple downloads this can be a painful process ;-{ Otherwise see if you have a friend who has the needed CD.

did you look at what concunt battery said? any thoughts on whats going on?

I think we need to get to the correct OS-X release for this system. I fear you are forcing a 64bit OS onto a 32bit based system. The CPU is 32bit externally, and the PCH and the systems EFI (BIOS) are only 32bit.

I think you're seeing address wrap-around where the address call is higher than the address lines so the high bit is ignored and the address is then smashed into the lower address space.

What do you mean? I need a 32bit version of the os to get the battery to be detected again? I don’t understand

Think of a number line 1,2,3,4,5 while we can guess the next number as being 6 a computer can only count on the number of address lines they have so when we have 48 lines and all of them are set to 1 the next line needs to be set to one and these all then get set to 0. In this case since we don't have a 49th line so the first line gets set to one and the others are now set to zero which means the lowest digit is set not the next highest which was called! This is a wrap-around condition that older system can encounter when using the wrong OS. So the address space becomes corrupted as the OS is not able to access the system correctly.

I would recommend you read some programing books & what Intel has on their web site.