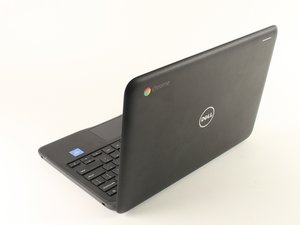 The Dell Chromebook 11 3180 is a cost-effective, student laptop that runs on the Chrome operating system. It was first released on Feb. 7th, 2017.

My chromebook has an admin on it, how do I remove it?

Well, I bought my Dell chromebook off of Ebay, and I can't really do anything, the admin has blocked most things and it has ibossConnect on it, can somebody tell me what to do? (I can't get in Dev. mode either)

how to go in dev mode

how to get rid of admin

You don't need to go into dev mode to wipe the admin off the machine. All you have to do is do a power wash. If the device is controlled by an admin that's a different story. You would have to contact the company that is controlling the machine and have them release the device. If your tech-savvy you can change the serial number on the device which will break the admin control but it is risky and you risk destroying the board.

You should be able to force it into developer mode by doing the following:

use the "3 finger salute", (esc+refresh+power) and follow the steps to remove OS verification, etc. It will then restart on its own (Dont force restart!).

It will likely say something like "dev mode has been blocked by administrator". Keep repeating step 1 till this works. Alternatively, replace the motherboard using another iFixIt guide.

The enterprise enrollment is tied to the serial number and locked to the board of the Chromebook using the serial number as the ID to push that profile. There is no way to get rid of it. It sounds like a ex school district machine since iBoss only ever shows up on those from what I've seen.

What you will need to do is return it as defective (because it is) to the eBay seller with the MBG or contact Google with a receipt and the Chromebook serial number to force things. Only once it’s removed can you powerwash it into a normal state again.

It’s your call here on what to do, but I’d probably just return it if I bought it because it’s not my fault the seller was negligent. Unless it was a cosmetic unicorn (which is hard to come by from schools) there's more then enough to go around. Schools tend to let abuse go because they're too afraid to hold the kids responsible since the parents cry until they get a pass, other then the ones who blindly trust damage claims (which is few relative to how many provide pushback). They only ever seem to go after major stuff like screens which are harder to fight against. They'll push hard for a Mac that's damaged but a Chromebook is excused because it's a difference in how much the repairs cost to absorb. Unless it's outright damaged they're probably not going to chase the student down - which is why many of the ex school ones look like crap or border on it.

As a Chromebook Tech, I can't agree more! There are ways around the Admin tie but it could cost you the board to which you might as well go buy a brand new Chromebook anyway lol.

@hbarnestechk12 Sure you can do something very specific with one piece of data you probably know what I'm referencing, but it's temporary and you need to reset it every time. It's a waste of time at best. This question is just as common and annoying as the iCloud lock ones. NO - you can't save a enterprise enrollment chromebook you got from eBay without going to Google and hoping they help or returning it.

The problem is Chromebooks are priced to be disposable - which is why schools love them. The MacBooks cost a lot to replace compared to a $150 enterprise ready Chromebook. Don't waste your time with Google when it's ex school - they're cosmetically terrible a lot of the time.

You’ll need to take off the back compartment off of your chromebook. Now you just need to take out the battery and unscrew the Read+Write Screw

will this factory reset it?

I need to know

It won't. It will leave it the same as it was except once the admin is removed you can then reflash the ROM so its not enterprise controlled.

Where is the read+write screw?

You'll need to make a recovery USB with a WIndows or Mac with Chrome installed using this app. Once that SD/USB is made, insert it into the device. Now, hold ESC + REFRESH (F3) and then hit power. It will boot into recovery mode and ask you some prompts. Follows them, the device will erase, reset, and that should remove the admin limits. Good luck.

What do I do if it won't let me download the app?

Install Chrome on a macbook or windows box and install the chromebook recovery utility on it. Choose your device and boom.

You have to powerwash your whole entire chromebook.

tried this solves every thing bathing it works too

Powerwashing wouldnt do anything though. even after a full factory reset, the administrator will still be there and you cant get past it. Essentially, powerwashing resets the device, not the enterprise that controls it.

Thx yes I've come to the conclusion that I cant it is enrolled thru some enterprise, I really assumed there was some way I could get around it. I tried any variation i could find but ultimately it's a lost cause i guess . A mom&pop computer shop couldnt figure it out tho right?? I am a novice and hopefully that's not the sole reason, it's a wash, so to speak?

ok hold in esc the reload button and the power button at the same time and then a yellow ! will appear and you press ctrl+d enter and then again then click space bar and then before you sign in enrool the chrom book

You should be able to force it into developer mode by doing the following:

use the "3 finger salute", (esc+refresh+power) and follow the steps to remove OS verification, etc. It will then restart on its own (Dont force restart!).

It will likely say something like "dev mode has been blocked by administrator". Keep repeating step 1 till this works. Alternatively, replace the motherboard using another iFixIt guide.

If you want to unblock a few sites you just type the website’s name/activate. However, you might have to write even more things depending on your district. Some districts are more secure than others. In my district, I have only unblocked one site tho.

Sometimes it asks me for my device code.