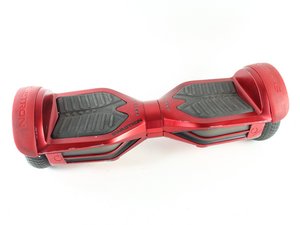 The SwagTron T3, released in 2016, is a self-balancing hoverboard that features LED motion indicator lights, bluetooth speakers, a built-in carrying strap, and a 5-level battery indicator.

Can I replace my cracked SWAGTRON T3 shell?

Can I purchase a new shell for the SWAGTRON T3 ?

Did you buy it at Target? Black Friday? We bought 3 - two were cracked upon opening the box - both right at the join between the footplate and the fender. The third board cracked and broke in that same location within the hour. I contacted Swagtron right away (they were actually open on Christmas) and worked through the issues with them. It was time consuming to document everything on my end, but it made the process much easier. One of the associates confirmed that they had a large number of calls coming in about the same problem - at that same location on the board.

Who do I contact as I had the same issue within hours of my son using it.

Contact Swagtron via the Chat option on their website or call them directly. They repaired all three boards for us as no cost. They were very helpful. I hope that the same happens for you.

I have had the same issue contacted SWAGTRON and they said it was cosmetic so they won’t do anything.

Was it a chip, a crack or a break? Contact Swagtron via the Chat option on their website or call them directly. You can always ask to escalate it to a manager. Send them pictures, etc.