With the SSD in an external case the iMac sees it just fine and I was able to install OS 10.11 on it and even boot from it that way.

When I install it in the iMac it won’t boot from it at all. I just get a white screen with no flashing question mark??

After further research and tinkering it turns out I needed a new Sata data cable. Apparently it provided good enough signal to work with the slower data rates of a hdd but not a new SSD. Hence the red cable.

I will do a better job of rerouting and installing when I’m ready to reassemble but yeah, new cable... 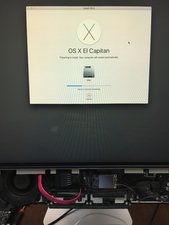 you have saved my past 2 days of troubleshooting by using a standard sata cable as a tryout and replacement.

i just did the same as you did and it works like a charm.

Bet you didn't remember to format it GUID Mac OS X Extended before you put a system on it. The Mac doesn't how it's formatted externally. It does care when it's internal.. Remember to address the thermal sensor issue with one from OWC if you haven't. Run away fans may ensue if you don't.

I did format as GUID Mac OS X Extended.

Glad you solved your problem. Come back if the fan starts bothering you. Would you mind telling others exactly where you got this cable and what it was.

i had the same problem and abrixen's fix worked for me too:

24" imac 9,1 won't boot from any ssd if connected to the hdd bay cable

the screen stays white if the ssd is connected to the main sata port, where the hdd used to be.

no apple logo, no question mark at boot.

no option boot menu possible even if another bootable drive is connected to usb.

just like @abrixen i took a standard red pc sata cable with a short straight plug on both sides, to be sure the bezel will close if it is plugged to the mainboard

reason for a short straight plug instead of an angled sata cable was, that any angled sata cable i could find had the angle pointing in the opposite direction, so if connected to the board it would point towards the wifi module

(a supermicro sata server cable was the one with the shortest straight plug i could find. almost as flat as the angled plugs as you can see comparing the original sata power cable to the supermicro sata data cable in the picture below)

to save time i didn't bother to route the sata cable below the main board, as it was so thin, that it fittet between the cooler brackets and the display and the temperature seemed to be the same to less compared to the heatsink side below the board, so if it is routed as on the picture the imac display will fit cleanly with no more pressure from below as the pressure the sponge spacers apply without an additional sata cable. 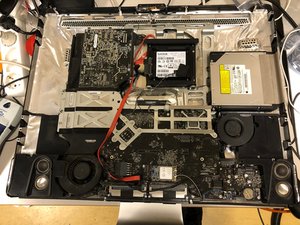 @abrixen: many thanks for sharing your fix with a picture.

Please help! I have a iMac 09’ 24” 3.06 EMC: 2267. I have installed a SSD harddrive (Kingston Ssdnow S400 480GB), but i really cant boot it up. Nothing happens, the chim comes on, the fan start run full speed, and after that an error picture comes on. I have format the ssd on my MacBook, and installed os Sierra on the drive. I have changed the sata cabel as i can see you have done, still dont want to boot up. I cant Enter boot menu either. I have tryed with a external bootable disk to.

i Can look up online that my imac run with sata 3Gb. And my new ssd run with 6Gb, but it should be compatibel with sata 3Gb. This Line is from specs: with backwards compatibility to SATA Rev. 2.0 (3Gb/s)

can u guys give me some help? I cant figure out what the problem is :/ Thank u! 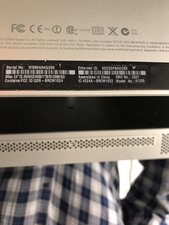 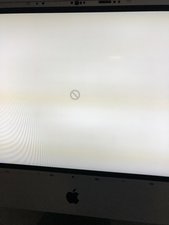 Just Saw my imac dont support Sierra. I Will install el capitan on it, and hope for the Best