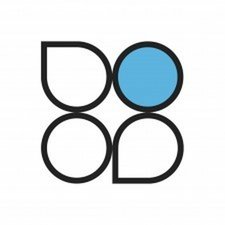 My replacement battery fails after 5 cycles

Has anybody had a similar issue?

I've now replaced the MBP battery twice with an iFixit item and initially all is fine. Green light goes to orange. The battery charges correctly. I can use the MBP and everything reports normal. After about 5 charge cycles i can no longer charge the battery. Coconut battery reports a battery failure with 0 to 1% charge showing and System reports that there is an 85w charge from the Magsafe so the AC power is good.

The battery was replaced in the first instance because the factory fitted battery was swelling. There has been no water damage etc.

Have i missed something obvious? 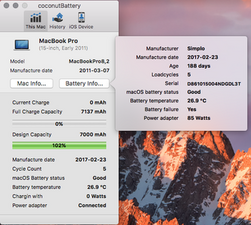 Here's a screenshot of the Coconut Battery report FYI 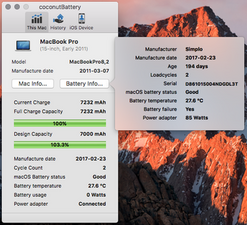 Ok. Here's a day 1 screenshot of the 3rd replacement battery. It came with an 80% charge and has charged up to 100% since installing with a healthy orange glow. Not sure why Coconut battery reports a battery failure already or for that matter why the battery serial number is the same. All seems to be working fine but then I've been here before with failures after 5 cycles.

Please post an image of that Coconut Battery report. One bad battery, OK. But two in a row is very unlikely.

OK, it's showing as battery failure. Contact iFixit and ask them to pretest the third battery as you have had two failures. Let them test it to see if they got a bad lot in. Reference them to this post for verification. When the new one comes in, let it fully charge then run Coconut Battery on it again and see if it is charging.

Do this a few days in a row and save the images. Report your finding back to this post and we'll see what it looks like.

Many thanks for taking the time to respond with good advice.

Hi. I popped in a 3rd (Apple branded) battery from a another supplier and it’s worked fine ever since. So maybe the ifixit batteries were a bad batch but in any case it was resolved with a full refund.

Can you let us know who that other supplier is? I also seem to be having problems with the iFixit battery.

Most likely you have a defective battery. New defective parts are extremely common so just because it was new, it doesn't mean that it was not defective or didn't have an issue.

You did get both of them from iFixit? That's... unlucky...

Yes both from iFixit ! I'll have to see whether a 3rd is any better...

How about 3rd battery?

Could you please update about that...