Fourth generation iPhone. Repair is straightforward, but the front glass and LCD must be replaced as a unit. GSM / 8, 16, or 32 GB capacity / Model A1332 / Black and White.

Is there a way to fix the battery connector?

I replaced a shattered iphone 4 screen and while attempting to disconnect the battery cable from the motherboard, one of the four little copper pieces on the motherboard came off (i think this is the battery connector?). after the repair, i placed the piece back in its place, and hoped that the battery would hold it there. The phone turns on and works like normal, but every 10 minutes it reboots to the apple screen. Is there a way to fix this?

i took this pic from some other guy's question. the piece that fell off is the top piece with the blue arrow (or the second one from the top).

correction, i think what was labeled in the pic was the circles. I mean the rectangular piece to the right of that

if one of the pads gets rip off the mother board then what?

First tell me about that copper pieces that came off...

man, your unit is in trouble.. It must be an important connector there. I've never tried repairing the same unit so I can't tell which part of the circuit it is or is it ok to leave it unconnected to others. If you know how to solder, you must scratch the board a bit(where that copper used to be) and search for a copper where it was used to be connected. To accomplish this, you might need a magnifying glass, and of course a "tester". Next you need to solder there the copper that fell off, or you need to replace with a new one (actually the soldering will do). But don't try it if you are not good at doing soldering with thin boards... I suggest you go to a professional technician to check it.

i was afraid of that.. thanks for your help

Where can I buy a new battery connector? Best regards, xeni2

Ask any mechanical or electrical engineer and they will advise that the use of jumper wires in such an application is a poor choice. There are several reasons that this holds true. One, when you install jumper wires into a device with such a small form factor and one in which you may remove the back plate in the future (for battery replacement, other repair work, etc) there is a tremendous risk that the wires can become caught (snagged) and torn. Secondly, those wires are routed under/over/around the motherboard frame. These wires can be routed next to or, worse yet, sitting on top of some very hot motherboard components. That heat that is generated by the components can have a detrimental effect on the wire itself as well as the heat conducting down the wire back to the connector itself.

We see dozens of these battery connector failures in our store every week. It is a very common repair for us. Here is how we have approached this repair. In coming up with this, we have spoken to (3) of the top circuit board rework companies in the US to solicit their input as to the strengths and weaknesses of each repair option.

In many cases when the battery terminal connector is ripped from the motherboard, one or more of the solder pads is removed as well. This is bad. The purpose of those solder pads is to act as a base for creating a solder fillet (joint) between the legs of the terminal connector and the motherboard. Each of those pads has a copper tailing that comes out and connects to the trace on the motherboard. When the pad is ripped out, you also lose that copper tailing connection to the trace. 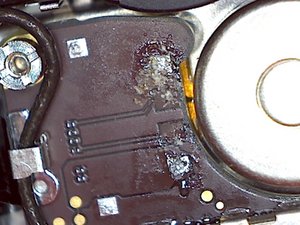 In our shop, we use the following standard procedure (again that was developed in conjunction with several motherboard rework companies).

1. We clean up the solder off of any remaining pads using a solder wick.

2. We then install new solder pads to replace the missing ones.

3. We use an exacto knife (or razor blade) and CAREFULLY remove the very top layers of the motherboard trace down to the point where the copper wire is exposed. You need to be careful as you only need to expose roughly the last 1/2" where the trace connects into the pad.

4. We then overlay solder the copper tailing off the new solder pad onto the exposed copper trace.

5. Once that is completed, we go in and put an epoxy coating on top of the exposed trace.

6. We use the same process for any other missing pads.

7. Lastly, we reinstall a new battery terminal connector by soldering it back onto the (4) solder pads on the motherboard. We also use a dab of neutral core silicone under the connector to better adhere it to the motherboard.

It is a very tedious process and one that is not simple, but it is the correct way to repair this iPhone 4S with a broken battery connector and lifted solder pad.

This is not the best approach but it worked for me. I simply taped it with electrical tape. I put a metal washer on top of where the connector is. I put another piece of electrical tape on top of the washer. I pressed the lid on firmly so it applied pressure down on the connector. Works fine. Again, this is not a real tech solution, just something to do if you absolutly need your phone for a day.

Thank you so much. I just folded up a piece of Scotch gloss tape into a small square a few layers thick and simply laid it on top of the metal battery connector as to create some more pressure to push down upon the connector. My 4s battery is now able to charge, and I will maintain this improvised solution until I can solder it properly. Thanks again!

If your battery connector has broken off and one or more of the solder pads on the board are missing, you may experience the iPhone reboots randomly and may not charge properly.

I have deleted spam- please put links or contact details on your profile page. Thanks, from pollytintop

i tried to change power flat but i see that the battery conector is not correctly work this isnt stable in the place.