So the touch suddenly stopped and wouldn't work. I tried another screen and still no avail. So it turned out to be the touch ic that has malfunctioned.

So I had it replaced.

The thing is that the front camera sometimes work and sometimes not.

The camera goes black until I need to restart a couple of times for it to work.

Main camera is fine and flash is fine if that makes any difference.

Could there have been something went wrong during the touch ic replacement or is it a coincidence?

Is there a way to stop this from happening?

Another thing is that the top right of screen just darkens randomly apart from the rest of the screen and when rebooted or sliding the brightness bar right it gets fixed. 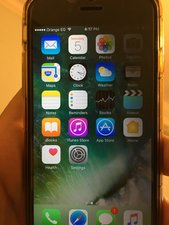 @reecee @refectio can anyone give me an image for the part that needs resoldering?

Okay, so after checking on it, they told me some capacitors related to the backlight are damaged from the water. They said there is a risky way to make bridges between them for the backlight to work properly. Should I go for it??

We tried another LCD and the malfunction appeared there but on the opposite site if it matters.

@mezo, see my edit above.

If you took it somewhere to replace the touch ID, take it back for them to resolve.

Camera issue could be caused by this, since they have to heat the board to replace the IC (possibly knocking something for the camera).

Backlight issue with the screen is a fault with the screen, or backlight circuit on the board. I would take it back to them and see what they do to help.

If too much heat was applied during the Touch IC repair, then some passive components (caps and filters) that are directly below the FCAM FPC connector (and opposite side of the board to Touch IC's) can become unsoldered. They are held in place by a black epoxy for protection but that epoxy can also hold them "above" the pads if they become (partially) unsoldered.

As @reecee says, bring it back to your repair shop.

EDIT: Here is a picture (this is a 6+ but fundamentally the same) 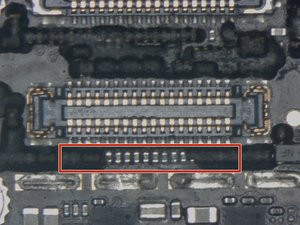 So i reheat those and press on them?

And the front camera please too. We tried another one and didn't work so I suppose it has something with motherboard too?

The picture I posted is the FCAM FPC connector. If another camera did not solve your problem, then the damage is probably along those capacitors highlighted in red.

I really don't recommend you start heating these unless you know what you are doing. Too much heat and you will damage the FPC connectors or the tiny capacitors will start merging together and then you will have a hot mess.

Have this done under warranty and save yourself the headache.

Okay, so those capacitors are for the camera and the darkening of screen too?

Or the problem of the screen darkening is somewhere else?

Each component has an individual purpose. You should look at the schematic to see what they do and which ones might impact the camera.

For the brightness, the backlight circuit has to be checked (assuming it's not the screen).

This is not a DIY repair.

If you had a touch ic replacement and only after front/rear camera, proximity, wifi/bluetooth , earpiece or home button/touch id isn't working guranteed too much heat was put on board. I do about 3 or 4 touch ics per week and this was a quick lesson to learn

If you have little micro soldering experience I STRONGLY recommend let a professional fix this as you can and almost guaranteed will do more damage to the board. Right now those small problems are easily fixable.

As stated above the overfill (epoxy) will expand with too much heat on the board and you'll need to scrape away at it and resolder any loose small components such as capacitors or resistors related to each non working item.

All smaller components are located right under or above the fpc connector itself as well.

Do you know what things that need resoldering? For the image in the main post?

Probably connected to touch ic replacement, check under the microscope if everything is ok!

First, just remove all glues under the camera connector with surgery blade and heat gun, check which resistor or capacitor is dc , just rework it